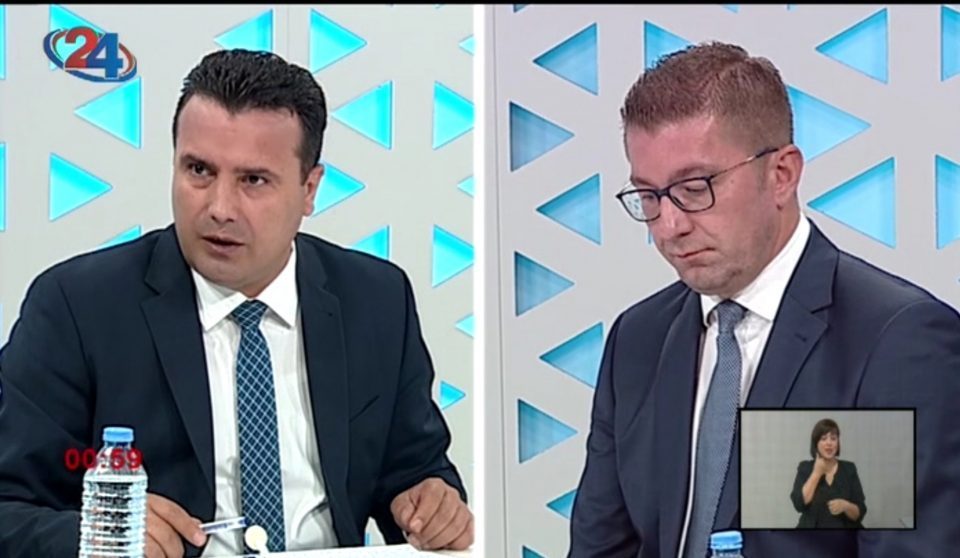 During their televised duel on Tuesday, SDSM party leader Zoran Zaev made a surprising offer to opposition leader Hristijan Mickoski.

As usual, Zaev insisted that SDSM will win the elections, and he even predicted the outcome – 55 to 48 seats in favor of SDSM. But as it requires 61 to form a Government, Zaev offered Mickoski a pact under which the losing major party supports the winner against blackmail from the DUI party or other ethnic Albanian parties. DUI usually plays the role of kingmaker and decides which Macedonian party gets to form a Government by getting to 61, often extracting concessions for the Albanian national cause. DUI currently conditions its future participation in a coalition with making an ethnic Albanian Prime Minister, and offered former member of Parliament Naser Ziberi in this role.

SDSM will not allow any blackmail. I don’t object to having an ethnic Albanian as Prime Minister but not as a blackmail. I will be the future Prime Minister. But if DUI conditions the coalition I will be willing to give 13 votes to Mickoski, that is what he will need to get to 61, so that he can form a minority Government. That is, if he is not willing to give me six votes so I can form a minority Government. We can’t negotiate under blackmail, Zaev publicly offered.

Mickoski responded that VMRO will win the elections and that this will in any case prompt a number of members of Parliament elected on the SDSM list to switch sides. Zaev relies on a number of ethnic minority parties who have frequently crossed over across ideological lines, and would provide the necessary majority. His SDSM party is also dependent on the equally unreliable turnout from ethnic Albanians, some of whom supported it in 2016, but don’t have a long tradition of voting for SDSM. Zaev’s enroachment on the ethnic Albanian voters has badly damaged his standing with DUI.

VMRO-DPMNE leader Nikola Gruevski made a similar proposal to Zaev in 2016, offering to support a minority SDSM led Government but that SDSM rejects the Tirana platform round of concessions toward the Albanian cause. Zaev rejected the offer, formed a Government with DUI and went on to make Macedonia a fully bilingual country. At the time, Gruevski’s proposal was painted as a sign of weakness by Zaev, who went on to bribe and blackmail VMRO-DPMNE members of Parliament to join him in voting for the imposed name change.