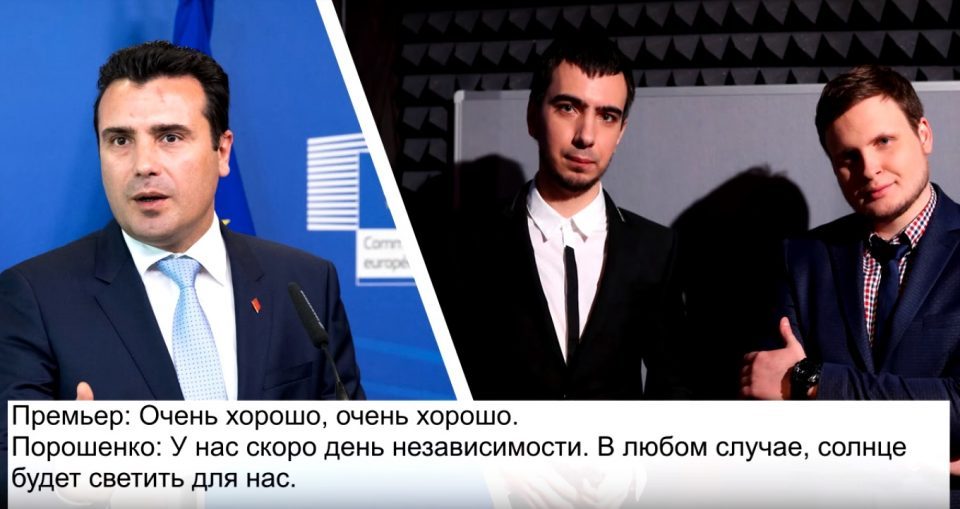 Zoran Zaev got pranked by the Russian comedians Vovan and Lexus, famous for their portrayal of world leaders before gullible politicians. They posted three conversations with Zaev, in which they comedians pretend they are Ukrainian Prime Minister Petro Porosenko and NATO Secretary General Jens Stoltenberg.

The conversations seem to have been recorded over a longer period of time, as Zaev discusses the 2018 referendum and the 2019 Ukrainian presidential elections. The hour long discussion raises questions whether Zaev really believed to have developed a close and friendly rapport with Porosenko, and how is it possible he got pranked several times by “Porosenko”, as if there was no follow up on what was discussed between the two countries.

During the conversations, Zaev keeps going to the theme of Russian meddling in the Balkans and attempts to bond with “Porosenko” over this issue, frequently blaming his political opponents in Macedonia of Russian ties. But, Zaev is also visibly worried over the danger of territorial swaps between Serbia and Kosovo, and attempts to drive the conversation with “Stoltenberg” in that direction. There is clear worry that such a move could reflect badly on Macedonia.

“Porosenko” advises Zaev to give full autonomy to Albanians, citing the example he says he set with Crimean Tatars, a proposal which Zaev seems open to. At times, “Porosenko” pushes his luck and explains a theory about the Sumerian heritage of Ukrainians and asks Zaev to call him “Peter of Macedonia” and offers to rename Ukraine into “Eastern Macedonia”, but Zaev fails to get the joke.