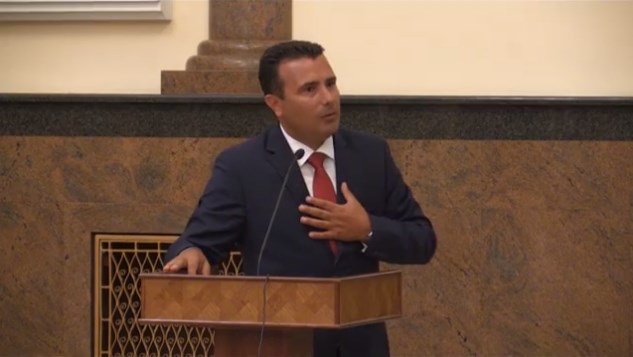 SDSM leader Zoran Zaev gave an apology of sorts to the Infomax news site, which he attacked during a recent press conference.
Zaev refused to take questions from Infomax, declaring them a patisan outfit that never reports positively on “his Government”. Infomax editor in chief Aleksandar Mitovski was recently given suspended prison sentence after one of their numerous investigative reports about Zaev’s links to the Racket scandal.

I received reactions from members of the press about the choice of words and the type of communication with some of the journalists in the Parliament. I accept the objections from the ZNM association of journalists and other colleagues and I told them that we should all strive in the future to have better communication and that I have no intention of influencing the work of the media or the journalist. Everybody is responsible for his actions and all have an obligation to discourage the spread of fake news, to end the slander, the attacks and assaults on any individual, including the media workers, Zaev said.

The conservative VMRO-DPMNE party also issued a press release about the incident.

We’ve become a country in which Zoran Zaev dares label media outlets, and declare them professional or not. A country in which journalists are attacked and face manufactured charges for doing their jobs. Zaev uses the judiciary both against his political opponents and media critics. Zaev is the leader of a party that invites only select journalists to his press conferences. In which the press is fed questions in advance and is divided on acceptable and unacceptable. Zaev continues to trample the freedom of the press, VMRO-DPMNE said in its press release.