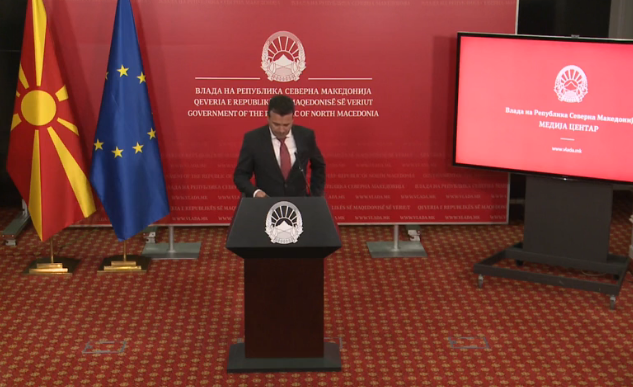 Prime Minister Zoran Zaev said that he regrets the failure of the negotiations held last night with opposition leader Hristijan Mickoski, and surprised the press with a strange statement that he believes Mickoski is responsible for the major racketeering scandal happening on Zaev’s watch.

He did not provide any evidence for his strange comment regarding the opposition leader and when pushed by the press, only said that he made the comment because Mickoski is publicly blaming for the scandal. Zaev’s top ally, Special Prosecutor Katica Janeva, was already felled by racketeering charges and half a dozen officials of his SDSM party have been interrogated by state prosecutors. VMRO-DPMNE informed that Zaev wanted to either appoint a loyal prosecutor such as Vilma Ruskoska to replace Janeva, or to curtail the mandate of the new SPO office so that it won’t be able to investigate allegations of corruption and crimes perpetrated over the past two and half years he’s been Prime Minister. All this implied that Zaev is being defensive about the scandal.

Zaev also blamed the opposition of demanding that the cases initiated by Katica Janeva, who exclusively prosecuted VMRO-DPMNE officials, are taken over by the new SPO prosecutor. Zaev is working to move these cases to the OJO/PPO office of state prosecutors, which is now lead by his loyalist Ljubomir Joveski, which will allow Zaev to maintain his campaign of political persecution against the opposition.