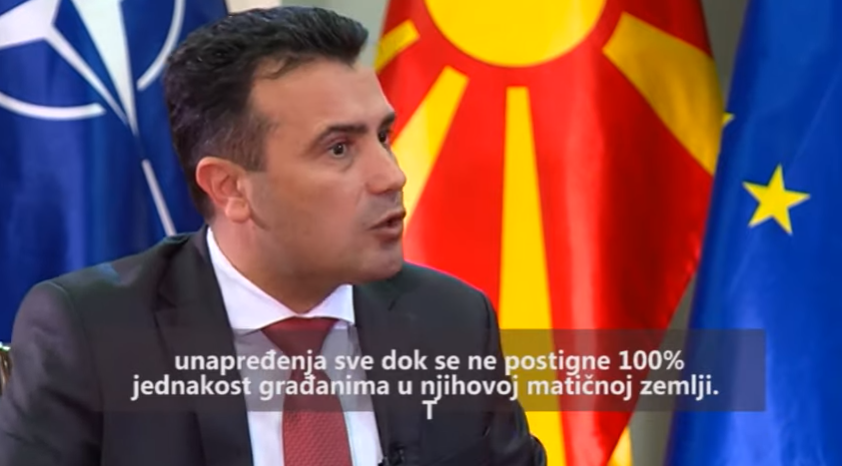 In his interview with Pink TV, outgoing Prime Minister Zoran Zaev insisted that he will stand by the Law on the use of Languages, which turns Macedonia into a bilingual Macedonian – Albanian state, despite the many issues with the law noted by the Venice Commission. Down in the polls among ethnic Macedonians, Zaev is desperate for Albanian votes in the coming early general elections and has reversed his initial position that he will respect the opinion of the Venice Commission.

I think that in Serbia, the time of Milosevic had the effect to separate Kosovo from Serbia. Kosovo and Serbia now both have a problem. We believe that we must not allow conditions for Albanians to even consider seceding from the Republic of “North” Macedonia. We are preparing an inclusive process because we learn from the past. This inclusive process in the Republic of “North” Macedonia is working. We are all at the same level now, all the citizens have equal rights and obligations and we will work to improve it until we achieve 100 percent equality, Zaev told Pink TV.

Zaev continued to describe how ethnic Albanians joined Macedonians in the Ilinden Uprising against the Ottomans. He did reject though the request that Macedonia acknowledges that Albanians were victims of genocide perpetrated between 1912 and 1956, a period that would mostly cover the Serbian rule over Macedonia. In his previous comments, Zaev has also rejected the idea that Serbia perpetrated genocide over the Albanians.