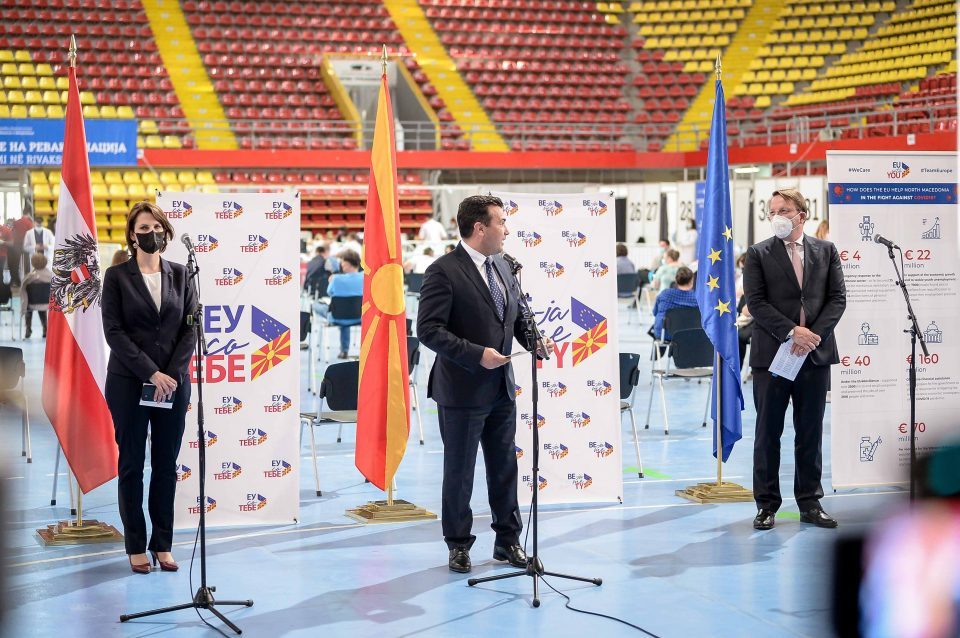 Prime Minister Zoran Zaev, accompanied by Health Minister Venko Filipce, together with European Commissioner for Neighbourhood and Enlargement Olivér Várhelyi and Karoline Edtstadler, Minister for the EU and the Constitution at the Austrian Chancellery visited Tuesday the vaccination center in Skopje on the occasion of the delivery of the first COVID-19 vaccines, donated and funded by the European Union, after which they held a joint press conference.

The period when it was difficult to provide the vaccines is behind us and all the indicators and the dynamics of the arrival of the vaccines in the upcoming period announce serious changes for the better. Even in such conditions, the solidarity of the EU for its member states, as well as for the candidate countries was not missing, Zaev said.

At the press conference, EU Commissioner Várhelyi expressed satisfaction with the presence in our country and the success of the delivery of the first vaccines provided by the European Union, which as he underlined was not an easy process, but is the result of the hard work of the European Union and the engagement of the Austrian Government.

I assure you that the EU cares and we have been accompanying the Macedonia and the Western Balkans from the very beginning of this pandemic and we will continue to do so. Now the crucial moment is to bring the vaccines, and we are doing it and this is only the beginning and do hope we can accompany you to end the vaccination campaign, he said.

Edtstadler told the press conference that “no one is safe and secure until everyone is safe” and underlined that vaccination centers are places of hope and that only this process can help overcome the pandemic that has caused suffering in Europe and around the world.

Today is a day of hope and I am glad that Austria was able to facilitate this process and deliver the first vaccines to the Western Balkans, ie to Macedonia, she said, adding that 650,000 vaccines have been provided for the Western Balkans, which will help unburden healthcare systems and return to normality will be ensured.