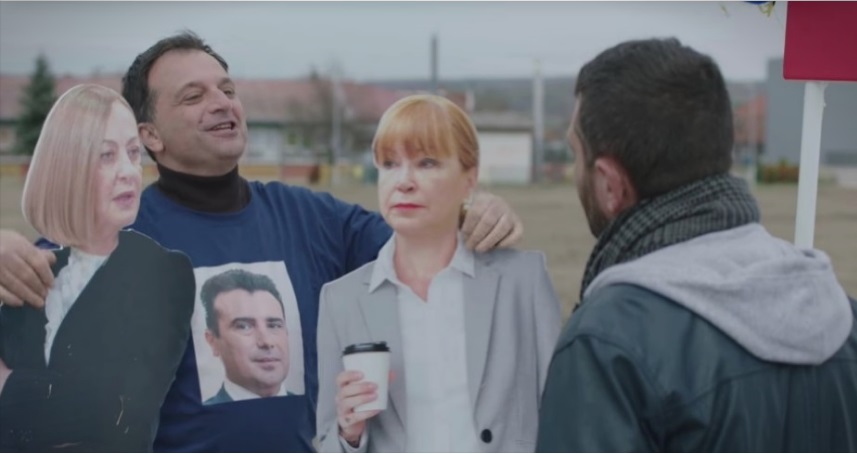 Judge Dobrila Kacarska and prosecutor Vilma Ruskoska, two of the main enablers of Zoran Zaev in the judiciary, objected to being included in a pre-election video by VMRO-DPMNE. The video mocks Zaev’s often repeated promise to upheld the rule of law, which even his die-hard supporters acknowledged has failed spectacularly – with the corruption scandal against his loyalist – Special Prosecutor Katica Janeva, and a number of politically motivated trials prosecuted by Ruskoska and adjudicated by Kacarska.

In a video, an SDSM activist faces off with a disgruntled citizen and tries to repeat the promises Zaev made before grabbing power in 2017, including improving living standards . When the citizens asks what happened to the promise of justice and upholding the rule of law, the SDSM activists offers him two cardboard cutouts of Kacarska and Ruskoska, to the voter’s disgust. Ruskoska informed the public that she has announced slander charges against VMRO. Kacarska, on the other hand, tried to recruit the diplomats in Skopje to her defense, insisting that she received positive marks for her work from the US State Department, the European Union and OSCE.

We did not expect that Kacarska and Ruskoska will like the video. Vilma Ruskoska remained silent after leaks showed that Zaev and Dragi Raskovski took 300.000 EUR from a businessmen from Montenegro. When it was revealed that they were involved in the 6 million EUR extortion done through judge Dimiskova, she did not react after healthcare fund director Den Doncev was shown taking a pile of money. The prosecutor is pardoning Zaev of all his crimes. It’s a sad fact that Vilma Ruskoska and Dobrila Kacarska became synonymous with Zoran Zaev’s violations of justice. They are part of the Louis Vuitton judiciary that allows criminals to act witm impunity, VMRO-DPMNE said, referring to the numerous corruption scandals involving Zaev, including the extortion of money using a Louis Vuitton bag.

Ruskoska prosecuted the Racket case in which she put away her rival Katica Janeva, but throughout the trial she carefully avoided getting anywhere close to Zoran Zaev’s role in the extortion, despite numerous leads pointing in his direction. Kacarska delivered lengthy “terrorism” sentences to opposition activists in the April 2017 trial, which was used by Zaev to blackmail three opposition members of Parliament to join him and vote for the imposed name change – a case which, along with Racket, is seen as the worst perversion of justice in his reign so far.