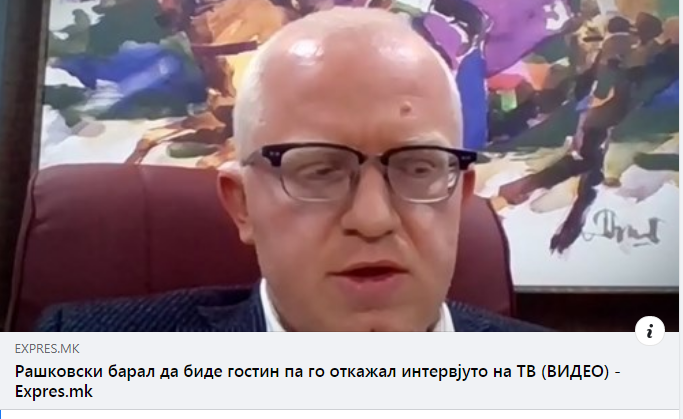 Zaev’s scandalous adviser Dragi Raskovski still hasn’t surfaced in the public, even after the police raided his home and office yesterday, looking for evidence in the case in which he is suspected of receiving 80,000 EUR from the Interior Ministry for a software he developed.

Raskovski reportedly arranged an interview with Kanal 5 TV yesterday to try to present his side of the scandal, but the interview never aired. VMRO-DPMNE spokesman Naum Stoilkovski today revealed that Raskovski was in contact with Kanal 5 and asked to be interviewed, but then called it off.

Attempts are being made to cover up this and other crimes, like the revelations that mafia bosses were given passports by the Interior Ministry. Meanwhile, slots for interviews are booked by Zaev, Filipce and other representatives of the SDSM party, giving them airtime to defend the mishandling of the vaccination process, Stoilkovski said.

Besides the allegations that he influenced the Interior Ministry to purchase this unnecessary piece of software, Raskovski was alleged to be involved in a number of other corruption scandals, such as a huge real-estate deal in Tetovo awarded to a suspicious businessman from Montenegro, and in influencing the state run M-NAV air traffic control company to purchase equipment from an Italian producer. Until recently, Raskovski was Secretary General in Zaev’s office, making him one of Zaev’s top associates, and he remains as his adviser.