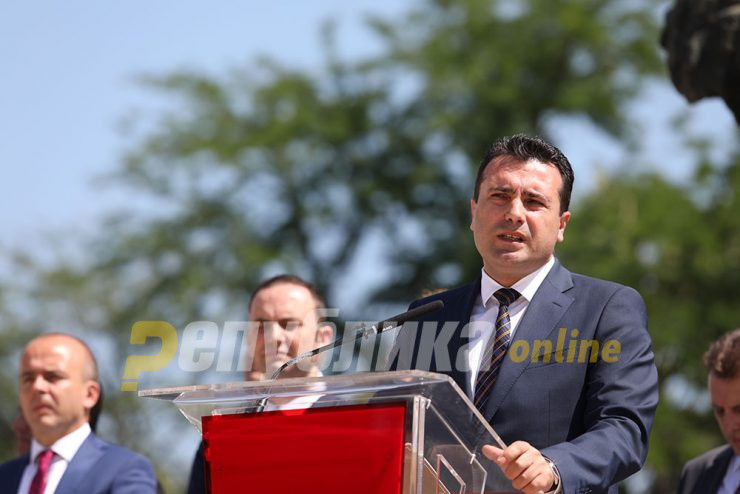 Mass pre-dawn arrests meant to instill fear in the public and to gaslight away from the series of failures by the Zoran Zaev regime. As before, the targets are prominent opposition officials. Former minister Mile Janakieski was already in house arrest when he was detained, again, putting into question the way in which the entire police operation was staged.

Also arrested, Dimitar Dimovski, member of the VMRO-DPMNE Executive Committee. Dimovski was prominent recently as the man who led the revelations of actual crimes and scandals perpetrated by Zaev’s police, chief among them the police attempt to conceal the beating and torture of a citizen of Shuto Orizari by the municipal Mayor Kurto Dudus.

Dejan Mitrevski, VMRO-DPMNE leading official in the Aerodrom municipality is also arrested. Aerodrom swung in favor of the opposition at the recent presidential elections, sparking panic in the ruling coalition.

The latest series of arrests comes after Zaev suffered a humiliating failure in the only field where he could claim some success in the eyes of the public – the promised opening of EU accession talks. EU member states rejected his request for a June date, and the replacement promise, that talks will definitely begin in October, remains uncertain. This showed that the Government is losing support among its main source of legitimacy – the international factors. It never had the support of the Macedonian public anyway.

Zaev’s retracted promise of early elections if he fails to deliver on a June EU accession talks date can’t be avoided forever, especially if the outcome of the October European Council is the same as the one last week. All points out to the creation of a Przino style Government soon, which will prompt a resignation from Zaev as Prime Minister. His failed attempt to name himself Finance Minister is seen in this light – it would allow him to cling on to the Government, at least as a technical Finance Minister. His promised purge, reduced to the lowest possible scope not to upset the SDSM factions and the relations wih his Albanian partners, still caused open fractures in the Government. A deputy minister accused Zaev of incompetence in reforming a crucial system such as education. A Finance Ministry adviser went even further and openly accused a Deputy Prime Minister of rigging public procurement contracts.

Under these circumstances, the regime resorted to the only tried measure that brings it at least a temporary hike in popularity – a new round of repression and arrests of its political opponents and public critics. Paid Government PR persons, hiding behind fake social media accounts, were let loose to rehash their stale jokes about the latest arrest of Mile Janakieski, a person who recently suffered a serious attack in the Shutka prison which is apparently not placed under full control. This time around, Janakieski is arrested for a public works project which was not even implemented. He is arrested a day after a Hungarian court confirmed that Macedonia is ruled by a regime, by refusing the request from Zaev’s courts and prosecutors to extradite his chief nightmare – Nikola Gruevski.

Following the brutal attack, Janakieski will be released into house arrest, but Ristovski remains in prison

This predictable move by the Zaev regime torpedoes all hope that he will persuade EU member states that Macedonia has overcome the problems with its rule of law and equal application of the law by October. On the contrary, it merely confirms that we have a judiciary that is being used to persecute the opposition for a made up physical assault, but won’t lift a finger to go after a representative of the ruling coalition who is heard, on tape, beating a man. We have a judiciary which arrests opposition officials for a planned work, but won’t examine direct reports of corruption revealed by a Government adviser, against a Deputy Prime Minister. We have a judiciary which can’t investigate the claims that top officials of Zaev’s party led a racketeering ring which blackmails businessmen and politicians, using the wiretaps which brought Zaev into power. We have a judiciary which tells the public that cannabis oil is sold by the gram, and that instead of a member of Parliament recorded purchasing drugs, the person to be arrested is the taxi driver who recorded him, or the municipal employee who recorded the Mayor as he was being beaten, or the opposition member of Parliament who brought light to both cases.

The first rule of holes is, when you are in one, you stop digging. Zaev’s regime is apparently incapable of doing that.