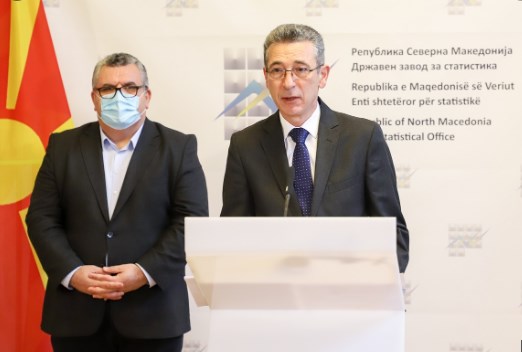 The first public confrontation between the heads of the State Statistics Bureau (DZS), tasked with holding a census in April, was predictably along ethnic lines. The ethnic Macedonian, SDSM party appointed director of the DZS Apostol Simovski stated that emigrants can’t empower a representative to state their ethnic and religious background.

But, as this is a key demand of the Albanian parties, his ethnic Albanian, DUI party nominated deputy Ilmi Selami, insisted that emigrants can do this. Albanian parties demand that the large Albanian emigrant community is counted along with the actual residents in Macedonia, and this in their mind must include the ethnic and religious background as crucial.

Selami has veto right over the process and the Government issued a statement assuring the emigrants that they will be counted.

An online application will be made available on the DZS website between March 1 and April 21. Citizens who fall under the category of “total non-resident population” can self-identify through the app, and it only requires that they enter their identity number as identification, the Government said.

Failing to do so, they can still empower a friend or a family member to give their details.

The opposition VMRO-DPMNE party, which calls for the census to be postponed until 2022, and to be conducted along European standards, as a census of actual residents, said that the dispute within DZS ranks was predictable.

How can Prime Minister Zaev expect the public to trust the census, when his own appointees are divided? Forcing a census will be harmful for the country and will not give a realistic picture of our population. A census in the midst of a pandemic is harmful to public health and we see that all other countries in the region and across the world have postponed their censuses, VMRO-DPMNE said in a press release.