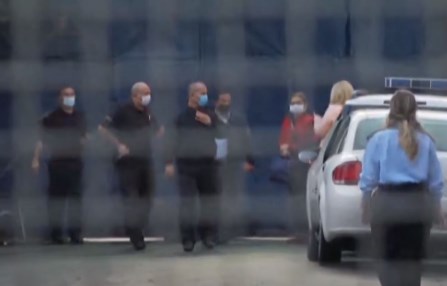 A video recording of the moment former Interior Minister and top VMRO-DPMNE official Gordana Jankuloska was taken to the Idrizovo prison was leaked to the press. This was likely done by the prison authorities, who apparently allowed the moment to be recorded, with the goal of inflicting additional humiliation to Jankuloska.

The former Interior Minister was sentenced to four years in prison in one of the cases initiated by the discredited Special Prosecutor’s Office – a partisan outfit of prosecutors who worked to help bring Zoran Zaev and the SDSM party to power. Jankuloska was charged with abuse of office over the purchase of an armored Mercedes vehicle which is still in use to transport visiting high level dignitaries.

VMRO-DPMNE said that it considers Jankuloska to be the victim of a staged, political trial.

The Government is taking its revenge on a mother, a wife, and a professional who served her country for years. At the same time, we have no investigations into the obvious bribery scandals involving Zoran Zaev, his brother Vice, his friend Den Doncev, the corrupt deal to build 2,000 apartments in Tetovo, the collapse of the Eurostandard Bank and other scandals we are flooded with each day. Zaev is toying with people and their lives and damaging our country, VMRO-DPMNE said in a press release.