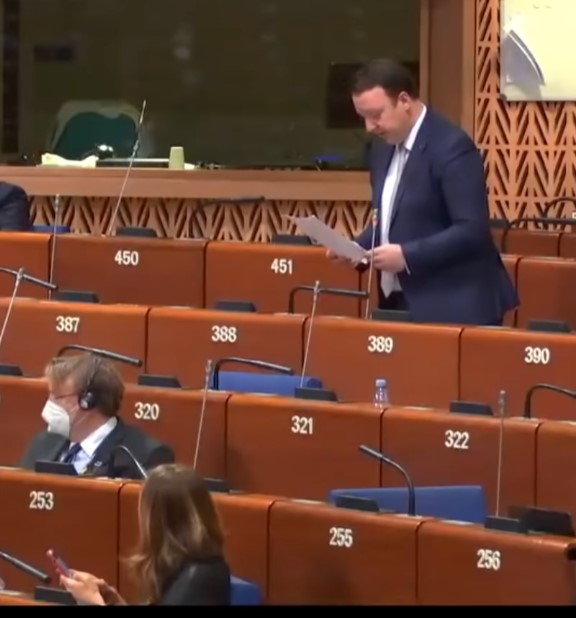 I believe it is very important now to say what I said there, because first of all it is an organization that works on human, linguistic and minority rights, and then because of everyone who was there, the vice president of VMRO-DPMNE, Aleksandar Nikoloski, said regarding his address before the Council of Europe in Strasbourg.

Nikoloski: Macedonians are not a product of the Comintern, we are unique Macedonian people who speak Macedonian

For the past two days, I have been hearing from our Ukrainian colleagues about the suffering they are facing. Listening to these shocking testimonies, I can only draw a parallel with the fate and denial of the Macedonian people, and the centuries-old disputes with our neighbors that have been and are bigger and more powerful. For centuries, our neighbors have challenged the Macedonians as a separate nation, culture and language. We were victims and expelled during the Balkan Wars and during the Greek Civil War, and finally challenged in the 21st century. The denial of the Ukrainian language and the thesis that the Ukrainian nation is the work of Lenin and the communists is similar to the thesis of the denial of the Macedonian nation and language and the thesis that the Macedonians are the work of Tito and the communist Comintern. Disputing and denigrating the two nations and languages has many similarities and symbolism, even the same words are used. This was not a coincidence, that even the great philosopher Francis Fukuyama, author of the legendary “The End of History and the Last Man” says that there are many similarities in the narratives used against Macedonia and Ukraine and the denial of Macedonians and Ukrainians, said Nikoloski in Strasbourg.

Nikoloski emphasized on the “Zaspij ako mozes” show that a Greek delegation was also present in the hall, with members such as George Papandreou and Dora Bakoyannis, but also the Bulgarian one, in which the former Bulgarian Foreign Minister Ekaterina Zaharieva was well known to the Macedonian public.

Exactly at the moment when Nikoloski mentioned the denial of the Macedonian nation and the claim that we are a work of Tito, she raised her head in shock and turned to Nikoloski. He also reveals that after the speech he received loud applause from everyone in the hall, which is a rarity at such sessions.