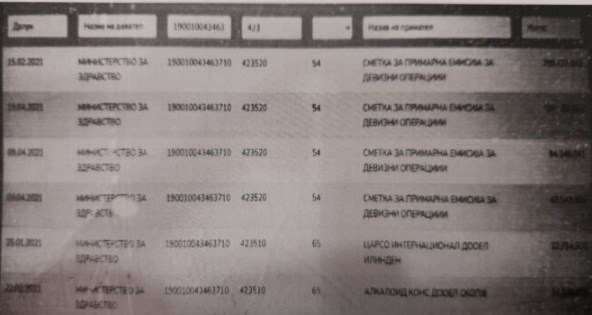 VMRO-DPMNE official Mile Levkov accused the DKSK Anti-Corruption Agency of trying to help the ruling SDSM party cover up its major vaccine scandal that greatly delayed procurement of Chinese vaccines. VMRO presented evidence that an 7.8 million USD advance payment was made to a shell company, whose inclusion in the deal prompted the Chinese Sinopharm producer to pull out of the deal.

DKSK member and former SDSM appointee Goran Trpenoski yesterday held a press conference in which he confirmed that the payment was made, but insisted that it was just a guarantee deposit, and that it was returned. Levkov today pointed that the documents clearly show this was an advance payment, not a deposit, and warned that DKSK may be trying to downplay the scandal.

DKSK is seems to be coming to Minister Filipce’s defense. Such a deposit would make sense if we are talking about a company that needs to prove its financial ability. In this case, Zoran Zaev and Filipce made an advance payment, Levkov said.

He added that the entire deal was estimated at 12.5 million USD or more than 60 dollars per dose, at a time when other countries were  buying the vaccines for 30 dollars.

Stabri, the company they were trying to use, is obviously a shell company. They don’t have a web site, no history, and was given 7.8 million EUR of our money, Levkov said.

The payment was returned when the Chinese manufacturer withdrew from the deal. It caused a delay in the delivery of the badly needed 200,000 vaccine doses of two months, during which Macedonia suffered the most lethal wave of the pandemic.