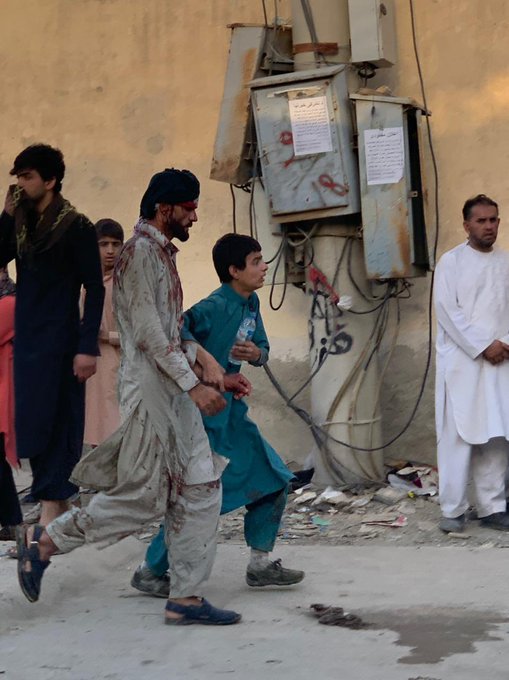 At least 13 people were killed in the attack at the airport in the Afghan capital Kabul – the site of an already fraught evacuation operation for people trying to flee Taliban-controlled Afghanistan – the Islamist group said on Thursday.

At least 52 others were injured, the spokesman for the Taliban’s political office in Doha, Suhail Shaheen, said. The non-governmental organization Emergency spoke earlier of at least six dead and more than 60 injured.

The Taliban strongly condemn this atrocious incident and will take every step to bring the culprits to justice, Shaheen added.

Shaheen confirmed that two explosions took place. German Chancellor Angela Merkel also said she assumes that there had been one or more suicide attacks in the Afghan capital Kabul.

She said in Berlin on Thursday that this was an “absolutely despicable attack in a very, very tense situation.”

According to initial information, one of the explosions took place at one of the airport gates and another at a nearby hotel.

There were fears that the death toll would rise significantly. Videos showed dozens of dead.

Nerves were already frayed at the airport, as thousands have thronged the facility hoping to escape, even as Western nations say they have to wrap up their airlifts because the situation is growing too dangerous. Several countries ended their operations on Thursday, with most others set to do the same on Friday.

The US has committed itself to ending its presence in Afghanistan by Tuesday, meaning that the rescue operations need to end so forces can break down the facilities and get all their personnel out. Other countries say they cannot provide airlifts safely without a US presence. US President Joe Biden refused to prolong the US presence there during a videoconference on Tuesday.

But the US is not handing over control to the government it supported for 20 years, but to hardline Islamist forces of the Taliban who shocked the world and took over the country earlier this month. That has led to the turmoil at the airport, as many Afghans fear life under the fundamentalist Taliban.

But the rush to escape also presented an opportunity for terror. Multiple governments had warned people to avoid the airport on Thursday based on fears of a terrorist attack. Although the Taliban is seeking to maintain order, groups linked to the Islamic State are known to operate in Afghanistan.

US citizens were among those hurt in the airport attack, Pentagon spokesperson John Kirby tweeted, calling the blast a “complex attack.” NATO and the EU condemned the attack.

Kirby also confirmed that another explosion occurred at a hotel nearby.

A photo posted on Twitter, evidently from inside the airport, showed a huge cloud of smoke. Local broadcaster ToloNews also tweeted images of the injured being taken away in wheelbarrows.

One witness told the broadcaster that the blast had been strong, knocking many into a moat running along one side of the airport grounds. He said he also saw foreign soldiers knocked down and multiple deaths.

Bilal Sarwari, a well-connected Afghan journalist, wrote on Twitter that the blast was the work of a suicide bomber who had worked his way into a large crowd before setting off the blast. Citing multiple witnesses, he said another person began firing a gun after the explosion.

US forces reportedly deployed tear gas in the blast’s wake, in the hopes of getting people to move away from the airport and spread out, according to one Kabul resident. He estimated that there were between 2,000 and 4,000 people present at the time of the attack.

The Islamic State affiliate in Afghanistan, called Islamic State Khorasan, or ISIS-K, had been singled out as the main threat to the evacuation operation before the blast. There had been fears the group could exploit the chaos at the airport to target foreign troops and innocent civilians.

The incident came amid increasing desperation, as Western forces – including Belgium, Canada, Denmark, Germany, the Netherland and Poland – announced the end of their rescue operations.

“This is a painful moment,” the Dutch government said in a letter to parliament, quoted by the ANP news agency.

Despite all efforts, people who were supposed to be flown out are now being left behind in Afghanistan, the letter said, citing security concerns for the quick withdrawal.

France will end its operations on Friday, Prime Minister Jean Castex told broadcaster RTL. Speaking in Ireland, President Emmanuel Macron spoke of 20 buses full of people with dual French citizenship or those who had worked with French forces, waiting in the chaos outside the airport.

“We’ll do our utmost … to make sure they get there [to the airport] and get evacuated,” he said. “I can’t tell you today if we will succeed in this operation, because the security situation is not under our control.

According to the latest information from the Foreign Ministry, France has flown more than 2,000 Afghans to France. The French ambassador has still not left the country, along with some embassy personnel and a security team.

On Wednesday, US Secretary of State Antony Blinken said up to 1,500 US citizens may still be awaiting an airlift, with thousands more Afghans also aiming to grab the remaining seats.

The White House on Thursday put the total number of evacuees on US and coalition flights at more 95,000 people, including some 13,000 in the past 24 hours.

Even before the blast on Thursday, the Russian ambassador in Afghanistan put the number of people who have died in the mayhem at the airport in recent days at around 50.

“There is chaos at Kabul airport. The United States cannot secure anything there,” Dmitriy Zhirnov told Russian state television. “There were casualties. About 50 ordinary people have died.”