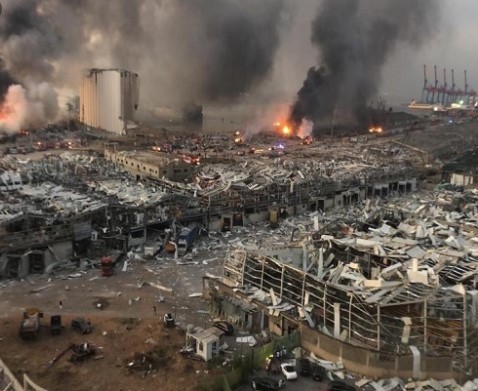 Beirut was declared a “disaster city” on Tuesday evening as the death toll from two massive explosions that rocked the Lebanese capital’s port earlier in the day rose to 73.

The conferees at the council decided on three days of mourning.

The cause of the explosions was not immediately clear, but Lebanon‘s internal security chief, Abbas Ibrahim, said the area was housing highly explosive materials.

“We cannot pre-empt investigations,” he said.

“What happened today will not go unpunished and those responsible for this disaster will pay the price, and this is a promise to the martyrs and the wounded,” Prime Minister Hassan Diab said.

The term martyr can be used in the Arab and Muslim world to refer to victims of accidents.

“Facts about this dangerous warehouse that has been there since 2014, i.e. for 6 years now, will be announced,” Diab said, adding that he would not pre-empt investigations into the blasts.

“At the moment, we are focusing on handling the disaster, pulling the martyrs out, and treating the wounded,” the premier said.

The Lebanese presidency later cited Diab in a tweet as saying it was “unacceptable” that a shipment of approximately 2,750 tons of ammonium nitrate was stored in a warehouse in Beirut’s port for six years without safety measures.

“I will not rest until I know who was responsible for what happened and give them harshest punishment,” Diab was quoted as saying.

Initial reports said the blast was inside a fireworks depot at the port.

United States President Donald Trump said he believed the explosion may have been an attack.

“It would seem like it based on the explosion. I met with some of our great generals and they just seemed to feel that it was. This was not some kind of a manufacturing explosion type of event,” Trump said during a press conference.

“They seemed to think it was an attack. It was a bomb of some kind.”

Among the dead was the secretary general of the Kataeb Party, Nizar Najarian, who reportedly died of severe injuries from the blasts.

The massive explosions rocked Beirut, causing panic across the the Lebanese capital.

Windows were shattered across the city and at its outskirts. Black smoke billowed over Beirut’s port. At least some of the wounded were buried under rubble.

Damage was reported in houses in central Beirut and the main highway near the port was covered with pieces of glass.

The United Nations Interim Force in Lebanon (UNIFIL) said in a statement that one of the force’s ships of the Maritime Task Force docked in the port was damaged, leaving some of its naval peacekeepers injured, some seriously.

A UNIFIL source told dpa no German peacekeepers, who are part of UN Maritime Task Force, were among the injured.

The Lebanese army was helping in transferring the wounded to nearby hospitals. Shortly after the explosions, telephone and internet services went down in the capital.

Residents in the Kartina area, a few metres from the location of the blasts, told dpa that they heard two explosions, the second one was the bigger one.

“There is damage that extended 7 kilometres away from the site,” a police officer at the scene said.

There were tragic scenes in hospitals amid calls for blood donations. People covered with blood were seen standing at the doors of the hospitals.

Some hospitals were damaged due to the explosions and some of their medical staff were killed, Suleiman Haroun, head of the private hospitals syndicate said.

Israeli Foreign Minister Gabi Ashkenazi was quick to tamp down any speculation of Israeli involvement, saying the explosion “was an accident caused by a fire, I suggest caution with speculation – I do not see any reason not to believe the reports from Beirut.”

Israel has often had military clashes with militias based in Lebanon. Just last week, Israeli forces scrambled after a still-unidentified event at the countries’ border.

Israel said it offered humanitarian aid to Lebanon via foreign channels, as the two countries have no diplomatic relations.

Qatar and other Arab states said they would send field hospitals over on Wednesday while French President Emmanuel Macron said his country was also sending aid to Lebanon.