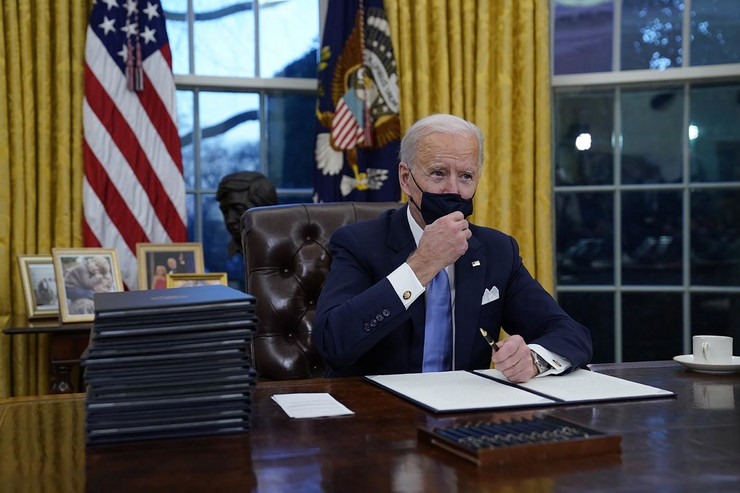 Joe Biden has marked the start of his presidency by signing a flurry of executive orders on a suite of issues, including Covid-19, the environment, immigration and ethics, The Guardian reported.

Some of the executive actions undo significant actions from Donald Trump’s administration, including halting the travel ban from Muslim-majority countries, and ending the declaration of a national emergency used to justify funding construction of a wall on the US-Mexico border.

He also signed an order allowing the United States to rejoin the Paris climate agreement and end the Trump administration’s efforts to exclude undocumented immigrants from the census data used to determine how many seats in Congress each state gets.

The president also moved quickly to address Covid-19, signing orders to mandate mask wearing and social distancing in federal buildings and lands and to create a position of a Covid-19 response coordinator.

In other moves, Biden also revoked the permit granted for the controversial Keystone XL pipeline and instructed all executive agencies to review executive actions that were “damaging to the environment, [or] unsupported by the best available science”. Biden also ordered all executive branch employees to sign an ethics pledge and placed limits on their ability to lobby the government while he is in office. The new president also ordered federal agencies to review equity in their existing policies and come up with a plan in 200 days to address inequality in them.

On his first day in office, Biden signed 17 executive actions – 15 will be executive orders.

As he began signing the orders, Biden, wearing a mask and seated behind the resolute desk said: “I think some of the things we’re going to be doing are bold and vital, and there’s no time to start like today.”

More at The Guardian