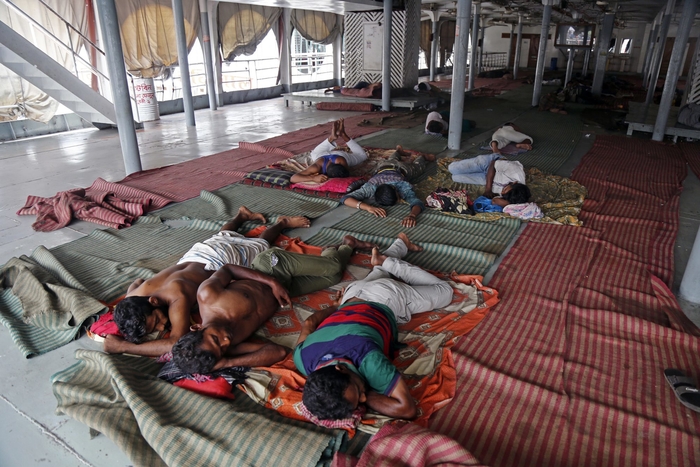 Cyclone Fani, one of the strongest storms to hit South Asia in several years, barrelled into Bangladesh on Saturday after causing widespread damages and loss of lives in India.

The cyclone struck India‘s eastern state of Odisha on Friday morning, packing windspeeds of up to 205 kilometres per hour along with torrential rains.

Nine people were killed, according to local media, but officials confirmed only three deaths and more than 160 injuries.

The cyclone travelled inland to neighbouring West Bengal state, and by Saturday afternoon had entered Bangladesh.

Heavy rains lashed the capital, Dhaka, and a few coastal districts as authorities ordered the closure of seaports.

The eye of the cyclone was tracked west of Dhaka and will stay over the country for six more hours, Shamsuddin Ahmed, director of the Bangladesh Meteorological Department, told dpa over the phone.

The storm had weakened, with wind speeds of up to 88 kilometres per hour, Bangladeshi weather officials said.

On Friday, the fierce storm submerged villages, uprooted power and communication lines, and forced the evacuations of 1.2 million people in Odisha.

The cyclone also brought moderate to heavy rains in Kolkata and other parts of West Bengal, but no casualties were reported.

Life was limping back to normal Saturday in Odisha, which bore the brunt of of the storm. Hundreds of workers were clearing roads with felled trees that had blocked traffic.

“We are yet to confirm reports of deaths linked with the storm and are also ascertaining the exact extent of damage to infrastructure and agriculture in the state,” Mahapatra said.

The UN agency for disaster reduction commended the Indian Meteorological Department’s “almost pinpoint accuracy” of early warnings that helped authorities conduct a well-targeted evacuation plan and minimize the loss of life as the severe storm hit Odisha, according to the Indian Express daily.

“We are yet to see the final death toll figures. But although Odisha is a poor state, it has become a role model in the world for disaster management,” Randeep Rana, a senior National Disaster Response Force official said.

Cyclones often form over the Bay of Bengal from April to November, bringing widespread destruction in India‘s eastern and southern coastal regions.

Fani is among the most severe storms to have hit the country in two decades. More than 10,000 people were killed in 1999 when a cyclone packing winds up to 260 kilometres per hour slammed into Odisha.