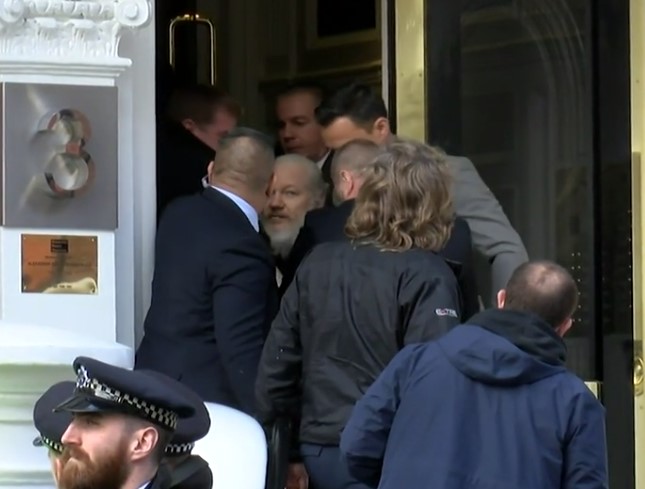 The Metropolitan Police said officers arrested Assange, 47, for failing to surrender to an earlier warrant issued by a British court, after Ecuador’s ambassador invited them to enter the building in central London.

“Today, I announce that the discourteous and aggressive behaviour of Mr Julian Assange, the hostile and threatening declarations of its allied organization against Ecuador, and especially, the transgression of international treaties, have led the situation to a point where the asylum of Mr Assange is unsustainable and no longer viable,” Moreno said.

WikiLeaks alleged this week Assange was subjected to “an extensive spying operation” at the embassy. Cameras monitored his “his every move,” including meetings with doctors and lawyers, the organization said.

Moreno said his government “has nothing to fear and does not act under threats.”

He said Ecuador had requested Britain to ensure that Assange would not be “extradited to a country where he could face torture or the death penalty.”

Assange has been taken to a central London station where he will remain until his court appearance, police said.

Assange had been holed up in the embassy since 2012 to avoid arrest and extradition to Sweden on allegations of rape. The Swedish judiciary later dropped its investigation.

Assange has said he fears being extradited to the United States where he could face charges relating to the publication of hacked government documents on the wars in Afghanistan and Iraq.

“Julian Assange is no hero and no one is above the law. He has hidden from the truth for years,” Foreign Secretary Jeremy Hunt tweeted.

“Thank you Ecuador and President @Lenin Moreno for your cooperation with @foreignoffice to ensure Assange faces justice,” Hunt said.

Home Secretary Sajid Javid, who was expected to make a statement on Assange in parliament later, tweeted that he was “rightly facing justice in the UK.”

Julian Assange to fight US extradition after arrest in Britain