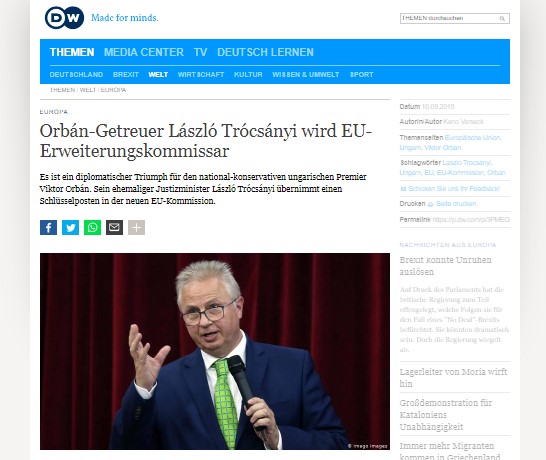 The last Hungarian EU Commissioner Tibor Navracsics was cautiously distancing himself from Orban’s liberalism, stressing that, above all, that he was primarily obliged to the institution EU, and that is why, according to the German service, this time Orban has played it safe and nominated Trocsanyi.

Hungary, as DW writes, also received one of the most publicized posts in the Commission: the EU Enlargement and Neighborhood Policy and for Viktor Orbán this is one of the biggest diplomatic achievements of recent years and a triumph over the EU because Hungary is facing EU’s Article 7 procedure.

Although Trocsanyi is not one of the agitators in Orban’s system and always argues prudently, he leaves no doubt about his position, DW writes and adds that against this background, the question arises for the new EU Commission of how loyal Trocsanyi will be towards Brussels.

The Hungarian government, DW says, expects the new Brussels leadership to stop immigration and defend the Europe of nations and of Christian culture. Beyond that, according to DW, the post of EU Enlargement Commissioner for Orban is also of great importance because Hungary, like no other EU country, has long been campaigning for rapid integration of the Western Balkan countries.