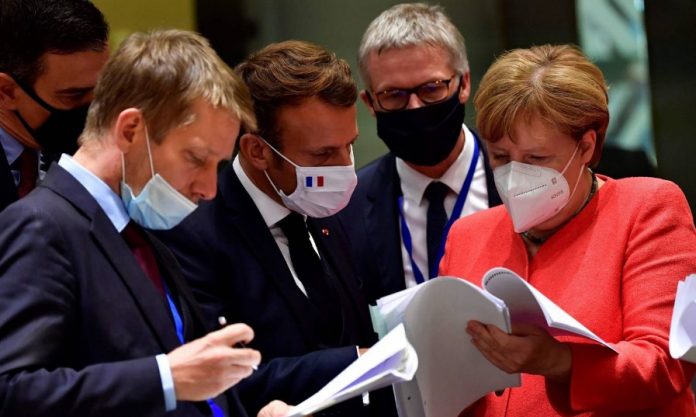 The 27 leaders of the European Union have struck a deal on a historic multi-billion-euro economic recovery package to curb the damage caused by the coronavirus pandemic, after four draining days of negotiations at a Brussels summit.

Comprised of a 750-billion-euro (855-billion-dollar) stimulus spending pot and a regular seven-year EU budget worth 1.074 trillion euros, starting from 2021, it is the largest such combined package ever agreed in the EU.

It will also see the European Commission raise debt on a large scale on behalf of member states for the first time.

“We did it,” European Council President Charles Michel said early Tuesday morning, hailing the agreement as a historic moment. “These agreements are a concrete signal that Europe is a force for action.”

“As exhausted as we all are here, we know that this is a historic moment for Europe,” European Commission President Ursula von der Leyen said.

After days of seemingly fruitless talks, premiers hammered out two key compromises in the final hours: One on the composition of the recovery plan – to be doled out as 390 billion euros in grants and 360 billion euros in loans – and another on the inclusion of a mechanism linking access to funds with rule of law compliance.

EU budget negotiations are always fraught affairs, as each country jostles to push for a spending plan that will play best with their domestic audience.

But this time, the coronavirus pandemic raised the stakes by sending the EU hurtling towards what looks set to be the worst recession in its history and a patchy recovery that will worsen the already considerable divergences in employment rates and public debt within the bloc.

The marathon EU summit, which narrowly missed breaking the record for the longest ever held, was defined largely by disagreement between a group known as the frugal four – Austria, the Netherlands, Sweden and Denmark – and states pushing for a higher proportion of grants.

Virus-stricken Italy, Spain and France need the cash fast, but the “frugals” opposed paying funds out as grants from the offset, and insisted that the spending drive macro-economic reforms and be placed under close oversight.

Germany threw its weight behind an ambitious package, with Chancellor Angela Merkel working in tandem with French President Emmanuel Macron.

Political heavyweight Merkel said she was “very relieved” a deal had been made, and described it as a “good signal.”

Standing beside her at a joint press conference, Macron described the conclusions as “truly historic.”

In an apparent concession to the frugal states, some are to receive larger budgetary rebates – controversial reductions in contributions handed to those who pay more into the shared pot than they get out.

What started in a somewhat giddy atmosphere on Friday morning with premiers cheerfully greeting each other with a pandemic-friendly elbow-bump turned sour when disagreements dragged on despite countless hours of bilateral talks and group discussions.

Sleepless nights took their toll; leaders pointed fingers at one other, pre-emptively shifting blame for a potential failure of the talks.

On Saturday night, some premiers were ready to throw in the towel, according to their spokespeople and EU diplomats.

But a new proposal for the amount of grants of loans put forward by European Council President Charles Michel seemed to break the deadlock.

Another major hurdle was cleared when Poland and Hungary signed off on the inclusion of a mechanism linking the payment of EU funds to compliance with the rule of law.

Under the plan, the European Commission will propose measures to be taken when democratic backsliding is detected, which will then be adopt by EU countries by qualified majority.

Both Budapest and Warsaw are facing a so-called Article 7 procedure over rule of law concerns like press freedom or curtails to judiciary independence. It can ultimately see a member state stripped of its EU voting rights – a move that is unlikely because it requires unanimous support.

Zoran Zaev’s First Deputy Prime Minister Artan Grubi condemned Bulgaria for its blockade of Macedonia’s EU accession talks, saying that “you can’t tell a nation that it was one thing until 1945 and another after that year”. Bulgaria demands that Macedonia accepts to redefine the Macedonian...
Macedonia 14.05.21 | 17:12