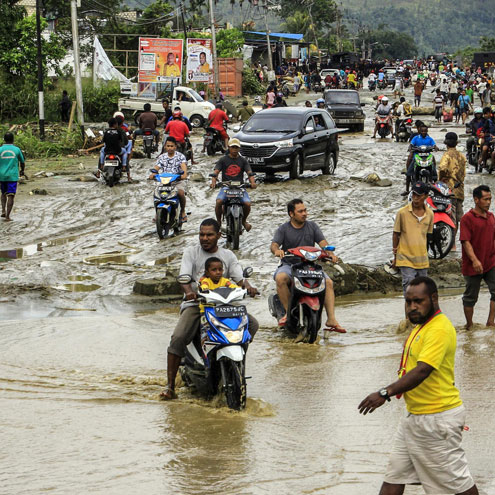 The death toll from flash floods and landslides that hit Papua province in eastern Indonesia has increased to 73, as search-and-rescue personnel continue to scour debris for victims and survivors, officials said Sunday.

“Most of the bodies were found under damaged houses and buried under materials brought down from the mountain area by the flash floods,” said a spokesman for Papua police, Muhammad Aidi.

Rescuers found seven bodies under houses buried in the landslides in Ampera village, while the rest of the victims were killed in the flash floods that came after torrential rain pounded Jayapura, the capital of Indonesia’s eastern-most province of Papua, on Saturday evening.

“The rain triggered flash flood that carried mudslides, logs and other material down the valley from the Cycloop mountain, hitting and damaging houses along the way,” Aidi said.

Most of the floods have receded as the water flew into Sentani Lake, but the mudslides have blocked the main road in the province, which borders Papua New Guinea.