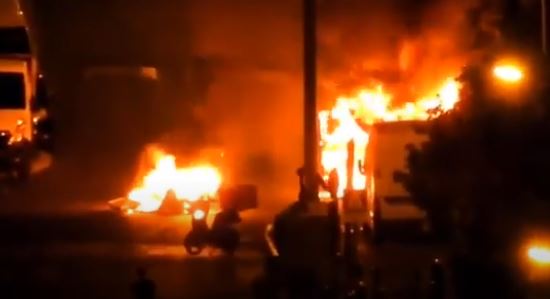 In an open letter, French radical left-wing organisations are trying to legitimise the unrest which have been going on for more than a week. Signatories to the letter include feminist and communist organisations, who are trying to depict the police in a negative light, the V4 news agency reported.

Video recordings of apocalyptic conditions in France have been appearing for more than a week. These indicate that not a single day passes without riots in the country. Violent riots broke out a week ago in Villeneuve-La-Garenne, a suburb of Paris, near the commune of Saint-Denis, known for its large immigrant population. The riots came in respose to the incident in which a police officer opened the door of his unmarked vehicle and struck – some eyewitnesses say deliberately – a motorcyclist, who was riding by at high speed. The young motorcyclist, who had no helmet, took a big fall and hit a pole after the crash. He suffered serious injuries, including an open fracture on his leg.

The incident was filmed and shared on social media, where many were furious that – while most of France is under lockdown and people are not supposed to leave their homes – anarchy rules in certain areas. The accident also triggered massive street riots with troublemakers smashing and breaking things in complete ignorance and defiance of the restrictions and curfew. The enraged mob of rioters wreaked havoc causing considerable damage.

People in several Parisian suburbs also started to cause damage, fired fireworks from apartments and balconies and threw stones at patrolling police cars. Flaming cars were also filmed in Aulnay sous Bois, Egly, Villepinte and Saint-Ouen, only a few metro stops away from the centre of Paris. Showdowns also cause considerable trouble to the police. In Rennes, the capital of the region of Brittany, a surveillance camera recorded as half a dozen youth in dark hoodies attacked a man, knocked him to the ground and then hit and kicked him until he did not move.

And yet, the violent incidents led radical left-wing organisations to try legitimising the riots in an open letter. The writing recalls the accident in Paris, claiming that racist discrimination is unbearable. Furthermore, the police increase it with violence and humiliation in low-income communities.

These riots are legitimate manifestations of people’s anger as police brutality does not stop,” the groups wrote.

In some instances, others have also pointed to police discrimination. A local made the following video from his window in Toulouse. It shows three police officers kicking a man lying on the ground with their hands and the muzzle of their dog. Reinforcements with dogs and a car arrive later. The man did not resist, and officers handcuffed him easily. The action of the police received much criticisms. The officers revealed that the person was a dangerous and aggressive man who fled from the psychiatry department of a hospital and he could have had a gun. The video also does not show the events preceding the action as the man tried to resist the officers aggressively, and hit them. What’s more, he put his hand into the mouth of an officer, shouting that he is infected with hepatitis C.