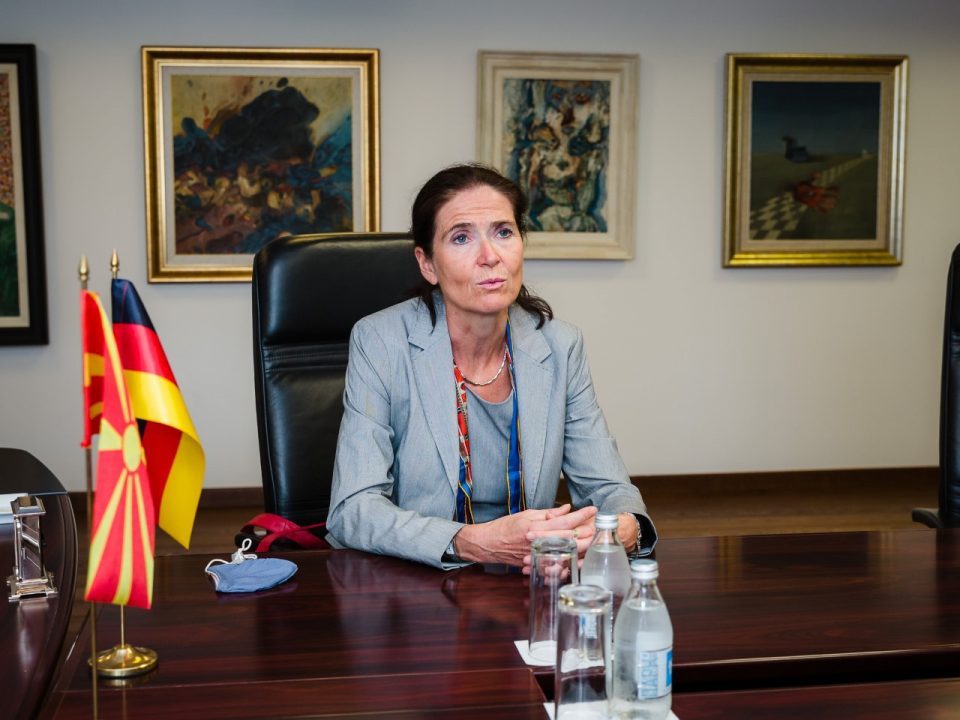 Bilateral problems should not be part of the negotiating framework for the European Union enlargement, says German Ambassador Anke Holstein.

In an interview with Radio Free Europe, Ambassador Holstein refers to Bulgaria’s explanatory memorandum sent to EU member-states, saying that the country has presented these requests to the members at the onset of August.

We, and according to my knowledge, all other members believe that bilateral problems should not be part of the negotiating framework and that bilateral problems should be solved bilaterally. Bulgaria has always been a big supporter of the region’s European approximation, including Macedonia. It is not in Bulgaria’s interest to block EU’s enlargement process in the region, says Holstein.

Asked if it is realistic for Macedonia to start the accession negotiations during the German EU Presidency, she says holding the first intergovernmental conference with Macedonia “is our big goal, a common goal for both Germany and Macedonia.”

We have to agree within the EU on the negotiating framework that is currently discussed in Brussels. When this is done we can give a date for the first intergovernmental conference, hoping it could take place in December, adds Holstein.

Regarding the negotiating framework, she says it is more expedient, requiring stronger political steer.

Chapters are opened in clusters, the fundamental criteria are being strengthened, the key terms in this methodology are predictability, credibility, dynamic, strong political steer, so these are all ideas and perceptions that benefit member-states, who can take part in the monitoring and reporting process. The economic governance is also strengthened, there is room for penal policies if reforms stall, but also positive stimuli for accelerated integration and stronger financial support. This means that the criteria are not harder but clearer, but the most important foundation of the accession process – each country determines the process through its own reform tempo – remains valid, says Ambassador Holstein.

In the coming period, she adds, the country needs to focus on the rule of law, fight against corruption, judiciary reforms, swift adoption of the anti-discrimination law and the OSCE/ODIHR recommendations in the Electoral Code.

A fundamental aspect of social life is the Census that is planned for next April, and Macedonia needs to start to position itself for the economic challenges in the domestic economy, which is reflected in the Government programme, notes Holstein.

She says constructive cooperation with the opposition is in the interest of the country’s future, which is especially valid for the European policy.

On the opposition’s protests immediately after the elections, Holstein says there are a right of free expression of opinion, a human right of every citizen, adding however that playing the nationalism card is of no help to anyone.

The German Ambassador says bilateral relations are remarkable, with about 200 German companies currently operating in Macedonia and creating 20,000 jobs.

“Germany’s biggest employer in the country is Draexlmaier in Kavadarci. The company is very satisfied with its plant in Macedonia and the support it receives from the municipality and the state. Such examples are the best advertisement for a country, demonstrating that the system is functioning,” underlines German Ambassador Anke Holstein in the RFE interview.

Merkel says Germany must do more to tackle climate change

Fauci says U.S. ‘probably would still have polio’ if there had been as much misinformation as with covid vaccines now