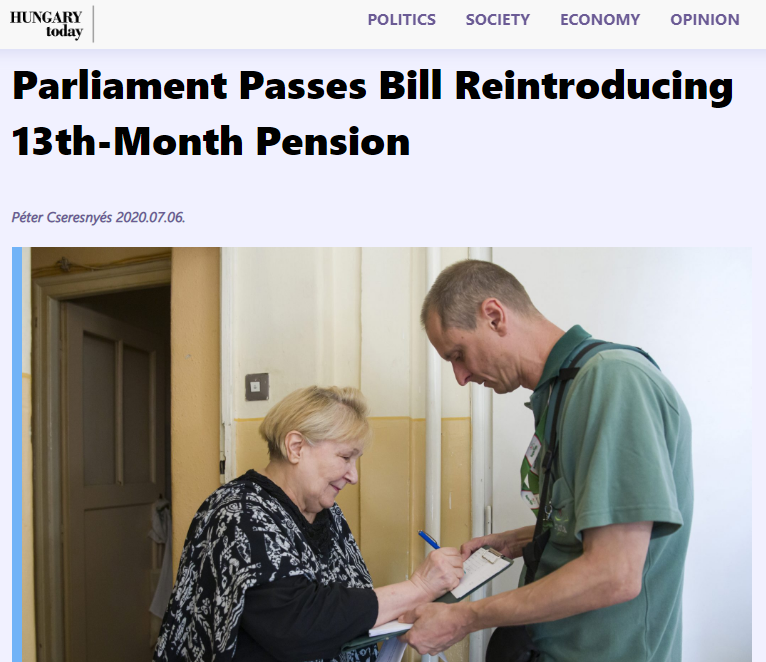 the Hungarian Parliament passed a bill on Friday allowing for the reintroduction of the 13th-month pension. The benefit will be progressively reinstated over four years. According to the bill, in 2021, the first year of payment, 25% of an extra month’s pension will be added, in 2022, 50%, and in 2023, 75%. By 2024, a full 13th-month’s pension will be given to pensioners.

Thereafter, beneficiaries will receive the total amount each year, in addition to their January pension. Viktor Orban announced in April that, in order to provide financial help for the elderly, the government would reintroduce the 13th-month pension, which had been abolished in 2009.

According to the new legislation, only those who have retired this year will become eligible. Those retiring from the upcoming January or later will have to wait a year. The new law is planned to take effect on January 1, 2021.

A recent survey shows that the majority of Hungarians support the reintroduction of the 13-month pension. At the same time, many criticize the Orbán-government for the decision, claiming the benefit to be no more than a tool for them to compensate for a possible loss of popularity as a result of the economic downturn caused by the Covid-19 epidemic. The timing of the reintroduction has also been lambasted: on the one hand, many believe that the post-coronavirus situation does not warrant such a decision (providing more benefits for the older and less active part of society when a cut in state revenues is expected due to the loss of jobs and stagnating wages); on the other hand, the 13th-month pension will be paid in early spring, which in the case of 2022, means that right before the election pensioners will be given 50% extra by the government.