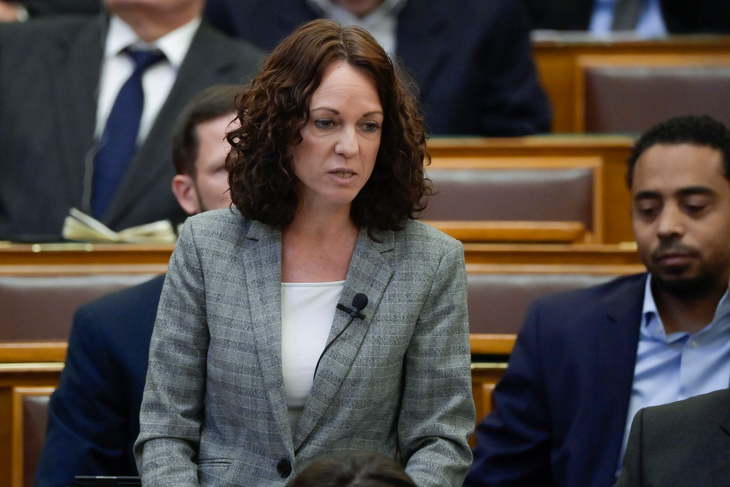 Further conversation fragments have been leaked to the Hungarian press in connection with the real estate scandal linked to the Budapest city leadership. The latest audio recording contains more informal conversations, which, like the previous ones, took place during the negotiations involving the sale of the City Hall building, but focused more on the foreign contacts and funding of the Hungarian left. In this latest material, Gyula Gansperger, former Prime Minister Gordon Bajnai’s “comrade-in-arms”, reveals new and shocking details about the links between the Hungarian left and foreign economic and political interest groups, the V4 news agency reported, in an article we carry in full.

Gansperger: There are these folks who have been trained abroad, like Timea Szabo, aka the Rose of Kabul, she worked for the CIA in Kabul.

Investor: Really? I didn’t know that.

Investor: Timea Szabo is 45 years old, she attended the Mokus School here. I didn’t know she is so American.

It’s been widely known about Hungarian opposition MP Timea Szabo that while attending university in the US, she conducted research commissioned by the UN on strategies for armed conflict prevent and the protection of vulnerable groups. Following that, in 2001, she worked for the NGO International Rescue Committee in Pakistan for three months, on issues such as Afghan refugees. One week before the 9/11 terrorist attacks, she returned to Boston, where she conducted research on resolution of the conflict in Afghanistan. The Hungarian Origo news portal reported that after the end of US airstrikes in the country, she moved to Kabul, where she worked with the UN’s Afghanistan assistance mission. She was tasked with promoting the capacity development of the new Afghan government.

However, what comes as completely new information about the MP is that Ms Szabo may have had or may still have some form of contact with the US Central Intelligence Agency (CIA). The source of Mr Gansperger’s information is not known, but this sheds a new light on Ms Szabo’s activity years ago in the opposition LMP (Politics Can Be Different) party and currently in the Dialogue for Hungary movement (Parbeszed) and, not to mention, her role in Hungarian public life in general.

According to the audio recording, Mr Gansperger did not stop here, but continued with further significant information on US influence and about those wanting to bring down the current Hungarian government.

Gansperger: Hang on a minute. These Soros people can affect certain things. But at the top is Gordon.

Gansperger: Those financial circles, the EBRD, all the big western banks are those who want to bring down the Orban government. And Simor was the vice president of the EBRD, as you know.

Gansperger: The [former] president of MNB [Central Bank of Hungary].

Investor: He was the president of MNB. He was at the top.

Gansperger: He’s a close mate of Gordon, and was also his boss at CA [Creditanstalt Bank].

In a recording leaked by Anonymus on Monday, Mr Gansperger had already said that “basically foreign forces and financiers are behind the moves of the entire left in Hungary.” In that part of the conversation, he explained that these are part of the Soros empire and other foreign tycoons. He added that he thought they were behind Gordon Bajnai. The recording which went public on Thursday adds that the EBRD, of which Andras Simor was vice president for finance until 2019, is also among the power centres that want the current Hungarian government to leave. The fact that Mr Bajnai and Mr Simor have a friendly, trusting relationship has been no secret.

The second part of the new recording essentially explains why it is important for several influential groups of big capitalists to topple the Orban government. It is worth quoting verbatim here, as the style of the conversation, the business approach, and the complete disregard for Hungarian interests is especially palpable.

Gansperger: Do you know how much damage has been done to the companies that have been earning fortunes here? And they had to leave the country. They had to sell EMASZ, DEMASZ [retail electric energy providers], everything.

Investor: And would they come back now?

Gansperger: Why the f**k wouln’t they? Listen, for a fixed profit of 8 per cent….

Investor: True, and if it is zero in your home country? In Switzerland…

Gansperger: Listen, listen! Suchman sold all the energy companies in Hungary, the networks. And no country sells its network, you know. It remains municipal and state property. The power plant, and the …, that’s another thing, and so are the sales. He sold everything and it’s included in the contract, I saw it myself – I was a member of the supervisory board – that an eight per cent return on assets was guaranteed. By contract.

Investor: Which is high.

Investor: And yet we sold it.

Gansperger: Without hesitation. It was led by Tamas Suchman, who then had not the slightest clue about how to evaluate a company.

Investor: He was a powerful man.

Investor: So, he was everything.

Gansperger: He sold it and it cost us a lot of money, on the one hand while we were paying for these and then we bought them back. Now these teams, you know … Okay, here’s Swietelsky and Strabag, but what can they earn compared to what they used to?

Gansperger: Little. You know, they used to pocket tens of billions [of forints] a year. They are now donating ten billion to the campaign. And why the hell wouldn’t they? They’ll take 30 out of the country next year.

To better understand the conversation, it is worth recalling that the Hungarian energy policy following the fall of Socialism has been characterized by two markedly different approaches. The primary goal of the left-wing governments in power before 2010 was to reduce state involvement and advance the interests of mostly multinational energy companies. After 2010, however, the right-wing government pursued patriotic economic policies. In 1994, the ruling coalition of the MSZP (Socialist) and SZDSZ (Social Democrat) parties enacted the first comprehensive, sector-specific law, called the Energy Code, regulating the electricity and natural gas sector. In a bid to make the national infrastructure earmarked for privatisation as desirable as possible for foreign capital, the state and its firms were allowed to enter into long-term contracts from 1995 on, guaranteeing an annual return on assets of 8% for multinational companies “on top of reasonable operating costs.”

During the Gyula Horn (Socialist) government, Tamas Suchman, who Mr Gansperger referred to, became the central figure, acting as the minister without portfolio responsible for privatisation. The measures clearly achieved their goal, with a significant part of the Hungarian public utility sector being purchased by French, German and Italian companies. A similarly worrying situation arose in the electricity sector: Hungary sold a significant portion of its large power plant capacity and by 1997 also sold the service providers. The government at that time passed essentially all sectoral risks onto consumers. For example, natural gas prices rose by eight hundred per cent in the decade after the fall of Socialism. In addition, state assets diminished dramatically and the Hungarian electricity company MVM, still-owned by the state, suffered continual losses.

Viktor Orban’s government put an end to this policy, incurring the anger of multinational companies. And, as Gansperger put it, this anger could lead to the situation whereby foreign energy companies and rail and road construction companies which lost ground in Hungry would financially support the left in the hope of returning to the market.

However, the audio recordings which came to light in recent weeks clearly suggested that a well-identifiable circle within the capital city municipality led by Gergely Karacsony operates a kind of “commission” scheme. A number of very valuable properties were sold or were slated for sale in this corruption model, including the Budapest City Hall, a building worth tens of billions of forints. The tracks of this “commission” scheme lead to the mayor’s immediate associates. According to the meetings with Russian investors, the rate of the “commission”, that is, the bribe, has hovered at around ten per cent. The Mediaworks News Centre (Hircentrum) found out that the City Hall had also been offered to Italian investors.

Several reports of criminal activity have been filed as a result of the published recordings. Police are currently investigating allegations of misappropriation, fraud, corrupt practices, bribery and accepting bribes.