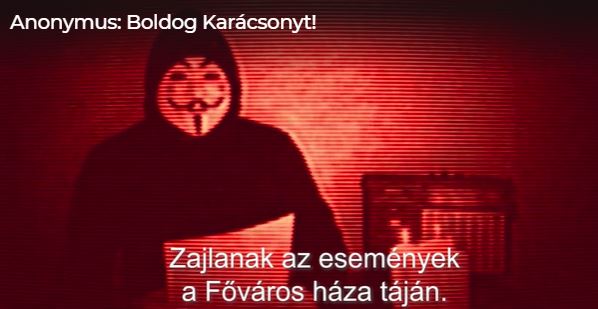 The City Hall scandal erupted in Hungary in early November, when documents were published according to which the leftist-liberal leadership of Budapest was planning to sell the plot and the old, traditional City Hall building. Several audio recordings have been released since then by a masked figure calling himself Anonymus. These tracks have revealed several suspected cases of corruption related to the capital’s leaders, as well as details about the people behind the deals and the commission scheme they were operating, the V4 news agency reported.

The masked figure has constantly forced the capital’s leaders to explain themselves. Mayor Gergely Karacsony and his staff regularly contradicted themselves and they did not seem to be in control of the situation, the Hungarian Origo news portal recalls. It was clear from the published recordings that – even despite the constant denials – the municipality did have plans to sell the property worth tens of billions of forints, and that the business talks preparing the sale were at an advanced stage. The city leaders continued to claim that the recordings were edited and manipulated.

On Tuesday, however, Anonymus came forward with a new video, announcing that he is sending the police around ten hours of unedited audio codecs, covering seven business meetings.

Anonymus said, “Events are unfolding fast around City Hall. The biggest players are clashing. Some don’t understand anything, some are in denial, while some others claim that it’s nothing but a pre-fabricated story. And they lie so badly.” He added that “I have to disappoint politicians. They are not in a particularly good standing with the authorities who will not be having a hard time. Especially as I decided to help them a little, by leaving them a small present under the tree.”

In tandem with the police investigation, an investigative committee was also set up at the municipality at the initiative of the ruling Fidesz party. The body has already questioned several persons of interest. One of them claimed that at a meeting on 5 May, Balazs Barts – the head of Budapest’s asset management company – said they were negotiating about selling City Hall, with the knowledge and consent of the city leaders, as well as the mayor.