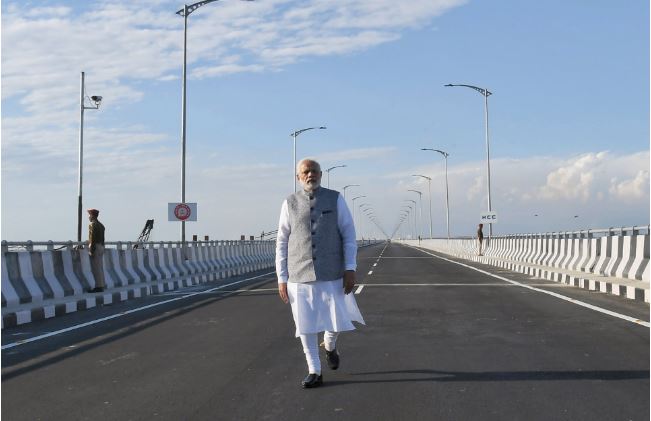 India on Tuesday opened its longest rail-road bridge in a poor northeastern state as part of efforts to boost defenses on its sensitive border with China, AFP reports.

Prime Minister Narendra Modi drove an inaugural cavalcade along the 4.9 kilometre long Bogibeel bridge over the Brahmaputra river to inaugurate the project in Assam state which has taken nearly two decades and US$800 million to complete.

“The inauguration of Bogibeel Bridge is a historic feat and I am glad to be here in Assam, among you all on this special day,” Modi said in his address.

“The Bogibeel Bridge is a lifeline for the people of Assam. It has enhanced connectivity between Assam and other parts of the nation.”

The bridge, near the city of Dibrugarh, will enable the military to speed up the dispatch of forces to neighbouring Arunachal Pradesh, which borders China.

With the opening of the bridge, the rail journey from Dibrugarh to the Arunachal Pradesh capital Itanagar has been cut by 750 kilometres.

India lost territory in Arunachal Pradesh in a 1962 war with China.

The bridge has been designed to bear the weight of India’s heaviest 60 tonne battle tanks and so that fighter jets can land on it.

Construction of the Bogibeel bridge was agreed by the government as part of a 1985 agreement to end years of deadly agitation by Assamese nationalist groups.