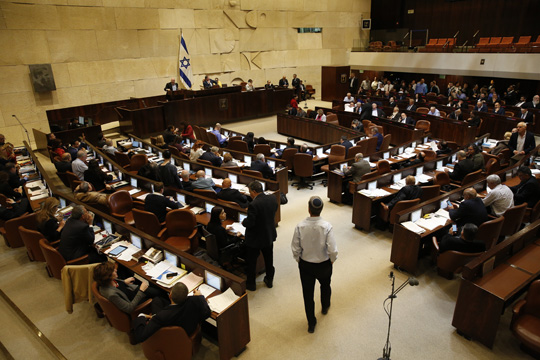 Israel is heading to the polls for its fourth election in two years, after the ruling coalition failed to reach an agreement on a state budget in last-ditch talks on Tuesday.

The parliament automatically dissolved at midnight (2200 GMT), when the budget deadline expired. The election is expected to take place on March 23.

The government meanwhile approved a Finance Ministry proposal for a budgetary arrangement described as a “rolling budget” for 2021.

Likud party leader Prime Minister Benjamin Netanyahu and Defence Minister Benny Gantz, head of the Blue and White party, blamed each other for the breakdown of their unity government.

“Likud didn’t want elections and we voted again and again against them,” Netanyahu said in a televised statement on Tuesday night, while already launching into his election campaign with a promise that his party would win.

“Netanyahu is taking us to the polls just so he does not go to court – any other version is either a trick or shtick,” Gantz wrote on Twitter.

Gantz and other critics have accused the prime minister of making political decisions with the aim of trying to avoid a conviction in his ongoing corruption trial. Netanyahu has been charged with fraud, bribery and breach of trust.

The coalition between rivals Netanyahu and Gantz, reluctantly formed in the face of the coronavirus crisis, faced issues from the start. But tensions recently intensified, with each accusing the other of violating the coalition agreement.

The agreement stipulated that the government must pass a two-year budget for 2020 and 2021. Netanyahu, however, reneged on that, arguing for a budget to be passed for the current year only, citing the coronavirus crisis.

However, critics believed he had sought to prevent Gantz from taking over as prime minister late next year – as the coalition agreement stipulated.

Other points of contention included the appointment of judges and the powers of the justice minister from the Blue and White party.

Late Monday night, a total of 49 of the 120 lawmakers voted against a bill to delay the budget deadline by a week; 47 voted in favour, while the rest either abstained or were absent.

Three Blue and White lawmakers voted against the bill, as well as Likud lawmaker Michal Shir. Soon after, Shir announced that she was joining a new party formed by Gideon Saar, another defector from the Likud.

A Knesset committee on Tuesday discussed how to manage any upcoming elections in accordance with coronavirus restrictions.

The next election is likely to cost both Netanyahu and Gantz votes, partly due to the formation of the New Hope party formed by Saar.

Polls have found Gantz’s Blue and White party hovering just above the electoral threshold. Likud is still projected to be the largest party, but Netanyahu is likely to find it difficult to form a coalition.