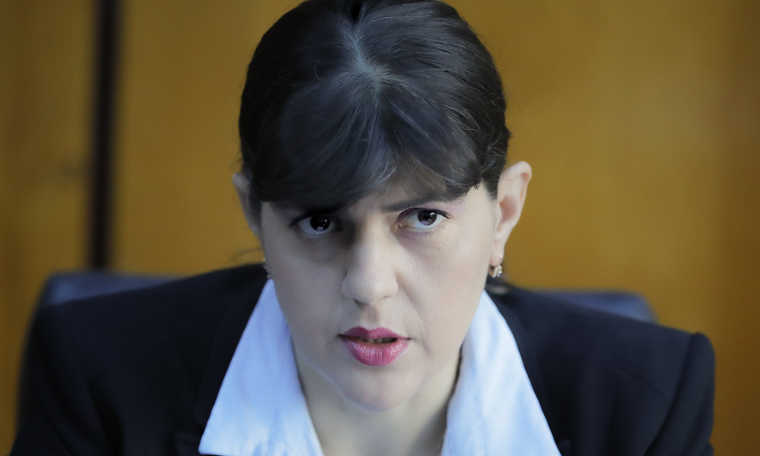 After the corruption charges initiated in Romania against Laura Conduta Kovesi, the newly appointed  European prosecutor, a number of leftist and ALDE EU politicians came to support the former chief prosecutor of Romania’s National Anti-Corruption Agency (DNA), instead of condemning her. Frans Timmermans and Guy Verhofstadt are the most vocal supporters of Kovesi, the V4 news agency reports.

The scandal surrounding Kovesi has also reached the European Parliament. The parliamentary group of the European People’s Party (EPP) said they supported the Romanian jurist’s appointment as European Chief Prosecutor. In an interview to the Romanian press Esteban Gonzalez Pons, vice-president of the EPP’s parliamentary group in Strasbourg, said political considerations played no role in the selection of the European Chief Prosecutor. He went on to express his support for Kovesi.

But it is mainly politicians often associated with the George Soros led initiatives in the EU, such as Frans Timmermans, who come up in support of Kovesi. The Dutch pro-immigration politician praised the work Kovesi has done. “There can be no relenting in the fight against corruption in Romania. There can be no amnesty for corrupt politicians who have been convicted before the courts. I have been quite brutal with the Romanians on this and I will be clear on that. In the fight against corruption, in my experience, Miss Kovesi did an excellent job over the years. The only thing I can testify to is that I’ve seen her at work and that I think she`s an excellent prosecutor. She’s done a very courageous job in Romania,” Timmermans said.

In a recent tweet Guy Verhofstadt, the Renew Europe group’s MEP, said he was “shocked” to learn that the Romanian authorities had launched an attack on one of the chief prosecutor nominees. In a letter he called on the EP President to facilitate Laura Codruța Kovesi’s unhindered participation in the European chief posecutor’s selection process.

These comments by Timmermans have provoked a serious outrage among the Romanian governing party’s politicians. In an interview with the French public service radio’s Romanian programme, PSD representative Catalin Radulescu said the Dutch politician had interfered in Romania’s internal affairs and put pressure on the Bucharest Prosecutor`s Office to support Kovesdi’s appointment as European Chief Prosecutor.

The Romanian politician recalled that this was not the first time Timmermans interfered in Romania’s domestic affairs, adding that he has done the same in Hungary, Poland and the Czech Republic. He said attempts by Timmermans to pressure Romania’s judiciary into clearing Kovesi of the charges were unacceptable. Radulescu says this is because the former DNA leader and Timmermans have an excellent personal relationship. He also pointed out that Kovesi’s name now appears in a total of 18 criminal files.

Responding to Guy Verhofstadt’s letter, PSD MEP Gabriela Zoana also expressed concern regarding the Belgian politician’s interference in Romania’s internal affairs. In an interview with Romania’s Mediafax news agency, the MEP said Verhofstadt’s meddling is threatening the rule of law. Zoana pointed out that Verhofstadt does not understand that Romania did not enter the EU to execute the orders of Brussels bureaucrats, but because it wanted to be an equal member of the European community. She also stressed that it was difficult to fathom how the European Liberals’ former lead candidate could support Kovesi, knowing that her name had cropped up in 18 different criminal files.

The Justice Ministry’s special investigations unit (SIIJ) in Romania has even launched a procedure against Frans Timmermans. According to the allegations, the Dutch politician is suspected of falsifying a 2018 Cooperation and Verification Mechanism Report regarding the reform of Romania’s judiciary. When the document was released by the European Commission on 13 November last year, Romania’s High Council for the Judiciary (CSM) noted that it contained factual errors, not least by claiming that CSM had excerted pressure on the High Court of Cassation and Justice.According to Romania’s former Social Democratic premier Viorica Dancila, it contained recommendations that violate the laws approved and affirmed by parliament and the Constitutional Court, which is a breach of the country’s sovereignty and also the Basic Treaty for the European Union.

However, subsequent developments seem to indicate that instead of factual errors in the drafting of the report, there was a deliberate effort to falsify the contents of the document. SIIJ lodged a complaint against Frans Timmermans on these grounds and the document announcing the initiation of legal proceedings was published by luju.ro, a Romanian portal.

SIIJ’s complaint accuses Timmermans and several other EU politicians of establishing a criminal organisation, falsifying public documents, abuse of power and spreading false information with regard to the EC’s Cooperation and Verification Mechanism (CVM). According to the criminal complaint, all the charges are linked to the falsification of the CVM report, dedicated to monitoring Romania’s judicial reforms.