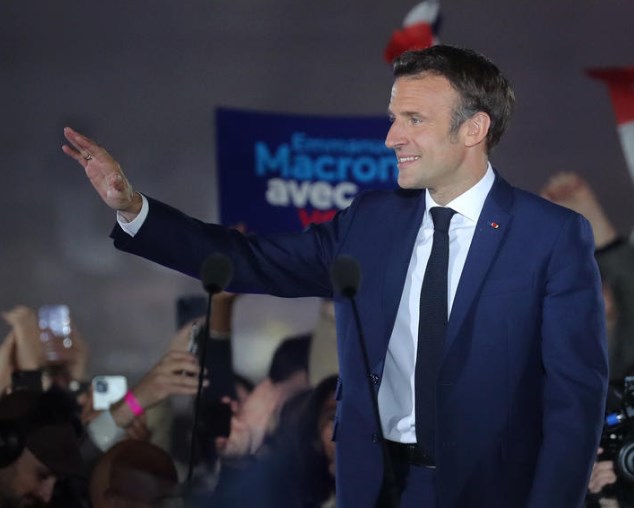 French President Emmanuel Macron looks ahead to governing in a “benevolent and respectful way,” he promised supporters, after defeating far-right rival Marine Le Pen in a run-off vote on Sunday.

Macron acknowledged France is “deep in doubt and division” and he promised that “no one will be left by the wayside,” as he addressed cheering supporters in the shadow of the Eiffel Tower in Paris.

French voters returned incumbent Macron to office for a second term, according to projections that showed him decisively defeating his far-right rival Marine Le Pen after polls closed on Sunday evening.

Macron received around 58% of the vote compared to Le Pen’s 42%, according to polling agencies for broadcasters France 2 and TF1.

“The years ahead will certainly be difficult, but they will be historic, and we will have to write them together for the coming generations,” Macron said.

Referring to voters who backed his rival, Macron said, “the anger and dissent that led them to vote for this must also find a response. That will be my responsibility and that of those who surround me.” He added: “I am no longer the candidate of one camp, but the president of all.”

Macron tried to alter his image as a politician from the Paris elite during campaigning, after being repeatedly criticized for arrogance and condescension.

Le Pen, 53, conceded defeat but she said the result nevertheless represented “a radiant victory” for the people of France.

Macron, 44, is seen as having benefited from the public’s desire for stability and centrist policies in the face of Russia’s ongoing war in Ukraine. He has also had successes in the labour market and a robust take-off of the French economy after the pandemic.

If the forecast is borne out when official results come in, Macron will have won with a smaller share of the vote than when he went up against Le Pen in 2017. Macron won then with 66%.

“This result is a testimony to the great distrust of the French people towards them,” Le Pen said in her concession speech, referring to those in power in France and the European Union.

“A thousand times we have been buried,” Le Pen said of her party. She said she would continue to do battle with Macron over immigration, insecurity and the raising of the retirement age.

Congratulations and messages of support for Macron poured in from throughout Europe.

European Commission President Ursula von der Leyen congratulated Macron in a tweet, saying, “I am pleased to be able to continue our good cooperation.”

European Council President Charles Michel meanwhile expressed relief at Macron’s re-election. “In these troubled times, we need a strong Europe and a France fully committed to a more sovereign and strategic European Union,” he tweeted in French.

German Chancellor Olaf Scholz welcomed Macron’s re-election as a sign of people’s commitment to Europe. “Félicitations, congratulations, dear President @EmmanuelMacron,” he tweeted. “Your voters have also sent a strong commitment to Europe today. I am happy that we will continue our good cooperation!”

German President Frank-Walter Steinmeier said he was “delighted that the majority of French voters support your pro-European course,” in a statement issued by the presidential office. “Your re-election is also good news for us Germans.”

He said Russia’s attack on Ukraine was a painful reminder that peace in Europe cannot be taken for granted, Steinmeier added, saying it gave him hope that France and Germany “stand so closely together” and “support the people of Ukraine in their brave struggle.”

Businesses too are relieved at Macron’s victory, according to the head of the BDI German Industry Association President Siegfried Russwurm. “German industry is relieved that France remains a strong partner in a time of international crises,” he said, adding that the major challenges posed by the war in Ukraine, the pandemic and climate change all required a functioning Franco-German engine at the heart of Europe.

Some far-right parties, including the Alternative for Germany (AfD), send congratulations to Le Pen, meanwhile.

And Jean-Luc Mélenchon, the hard-left candidate who came third in the first round of the vote, called on supporters to mobilize for parliamentary elections in June.

Macron seems to have slightly outperformed opinion surveys going into Sunday’s vote. Ahead of the race Macron led Le Pen by around 55% and 56.5%.

Some 48.7 million French citizens were eligible to vote as Macron and Le Pen faced each other in a run-off for the second time.

Since the first round of voting on April 10, the two campaigned feverishly to win supporters who backed Mélenchon, while persuading disenchanted voters to head to the polling booths was also seen as critical.

Macron emphasized his commitment to climate protection while Le Pen called for the constitution to be altered to allow for preferential treatment of French citizens when it comes to access to social welfare and housing.

The vote was watched closely by policymakers in Brussels, Berlin and Washington, especially as Le Pen called for fundamental alterations to the European Union by giving national law primacy over European Union law, for example.

Macron’s re-election meanwhile is widely seen as a guarantor for stability and continuity in French foreign relations.

French presidents are elected for five-year terms, to a role that has a major influence on the country’s politics and greater power than the prime minister, who is appointed by the president.

Once his victory is confirmed, Macron will be the first French president to gain a second term in 20 years.