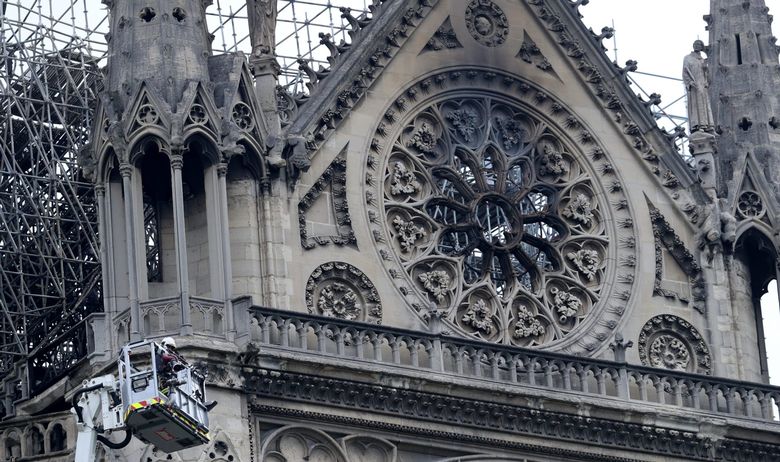 The horrific fire was finally declared extinguished at around 10am on Tuesday, over 15 hours after the fire first started in the attic of the famous cathedral.

But experts said the safety of the structure was still in doubt as firefighters and engineers gathered on the site.

Meanwhile the Paris prosecutor, who began an investigation as the flames still raged, confirmed on Tuesday morning that the cause was accidental, not an arson attack.

“Nothing suggests that it was a voluntary act,” Remy Heitz told reporters outside the Gothic cathedral, adding that workers employed at the site were being questioned over Monday’s blaze.

“The whole fire has been extinguished.

“Now we’re in the phase of investigating,” spokesman Gabriel Plus told reporters on Tuesday morning, adding that the fire had spread “very quickly” through the wooden roof of the world renowned monument.

Briefing reporters in front of Notre-Dame in central Paris, Plus said firefighters had focused during the morning on the cathedral’s two massive bell towers and making sure they had not been damaged.

The task now is to monitor the structure, to see if it has moved at all and to put out remaining hot spots, he said, adding that about 100 firemen will remain on site for the whole day.

The blaze which erupted at about 7pm on Monday, completely engulfed the roof of the 850-year-old cathedral, causing the famous spire to collapse and part of the vault.

On Tuesday government ministers met to devise a reconstruction plan, while the investigation into the cause of the blaze continues. Police had interviewed workmen on the site with investigators believing the blaze was caused accidentally and was linked to renovation work at the historic cathedral.

Notre Dame fire cause may have been electrical