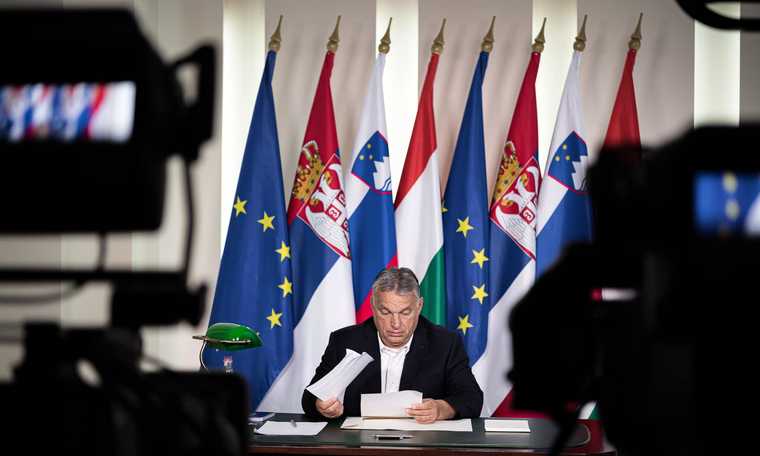 Europe is moving from crisis to crisis: first came the financial crisis, then the migration crisis, and now we are faced with the coronavirus crisis. In the past, the EU has always given reactive answers to the problems, but now we must try to act and think proactively, Hungarian Prime Minister Viktor Orban said at the Europe Uncensored web conference on Wednesday, the V4 news agency reported. The Hungarian prime minister said Europe was in retreat and the continent was performing worse than it did 30 years ago, quoting numbers to support his argument.

30 years ago, the fertility rate in Europe was 1.8, compared to only 1.5 in 2018, and the number of marriages is steadily declining. European countries have also decreased their security spending, and the EU’s weight in the world economy has dropped from 25 to 15 per cent since 1990, Hungarian Prime Minister Viktor Orban told the Europe Uncensored online conference. The web conference was also attended by Serbian President Aleksandar Vucic, Slovenian Prime Minister Janez Jansa and Francois-Xavier Bellamy, the parliamentary group leader of the French Republicans party.

Viktor Orban pointed out that the balance of power has also changed significantly in Europe. Thirty years ago, German-French economic cooperation was carrying the European economy on its back, with Britain playing a balancing role. The UK has left the EU and France has weakened, leaving Germany as the bloc’s largest economic power. “Today, everyone is waiting for Germany to save European countries where the coronavirus has caused terrible devastation. When we talk about the future of Europe, we must not forget this”, he added. The Hungarian prime minister also pointed out that while there are many leading politicians in Central Europe who took part in dismantling Communism, there was only one such figure in the West: German Chancellor Angela Merkel.

The Hungarian premier pointed out that Europe has been moving from crisis to crisis in recent decades: first the credit crisis, then the migration crisis, and now we are faced with the coronavirus crisis. He said the problem was that each crisis has been handled differently in Western and Central Europe. The EU has always given reactive answers to the world’s problems in the past, but we must try to think ahead and provide proactive answers, he added.

Speaking about the future of Europe, Viktor Orban explained that he sees two different concepts at play. The first concept, which he called “semi-Marxist”, is the progressive one, which pursues liberal, pro-migration and anti-family policies, and considers Christian values to be irrelevant. The other concept is based on old European Christian culture; it is fundamentally based on family and national identity. “The question is how the two parts of Europe can be held together in this situation”, he said.

PM Orban described the fact that Europe cannot solve its own issues, yet it wants to solve the world’s problems and tell other countries what to do as problematic. He stressed that Western European states should not have a say in how other countries operate. “Don’t try to tell us, Eastern people, how to live our lives,” the Hungarian prime minister said.

Regarding the EU’s 2021-2027 budget, he ighlighted the fact that member states have always managed to reach an agreement, adding that a compromise was required again. The long-term budget and the Next Generation EU, a fund made up of loans, must be managed jointly. The allocation of the latter should be “fair, flexible and equitable”, as it will not be repaid by today’s generation but by “our children and grandchildren”, he said.

Jansa said one of the biggest challenges the EU must face was the spread of Marxist culture, which continues to advance through a false image of democracy projected through the media, the universities or the political parties. This, according to Jansa, keeps the group of countries trying to resist under a constant siege, with others branding them as “fascist, or populist at the very least”. He stressed that the issue was about protecting European values and the stakes were far higher than the future of the EU or its institutions.

The prime minister underlined that the EU is faced with a serious demographic challenge, adding that family policy and a properly guided migration policy may provide solutions. He added that although migration was used by many as a tool to fight the ageing of societies, this method has proved ineffective and may even cause damage in several places, if its social, economic and cultural effects are left unconsidered.

The Hungarian premier stressed that Europe must focus on competitiveness and economic cooperation. The European People’s Party must be a driving force in the development and implementation of the new European strategy, PM Orban concluded.