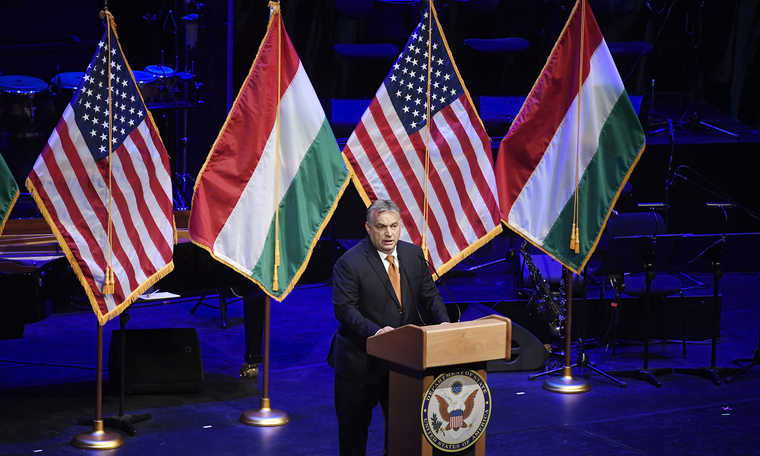 Hungary and the US endorse and protect the same values, Hungary’s PM Viktor Orban said at the US embassy’s Independence Day reception at the Budapest Congress Centre on Tuesday night, V4NA reported.

Describing Hungarian-US relations, Orban said: a very colourful picture has unfolded over the years, full of excitement and emotions, with high points and low points bringing good times and bad times. Hungarians feel that good times have come, he said, thanking David Cornstein, US ambassador to Hungary. Relations have always depended on whether or not there is an overlap between the values the US administration supports and the values Hungarians protect, Orban added.

Today the answer is definitely positive, the prime minister stated. Americans have good reasons to state that America is first, and the Hungarians also have good reasons to state that Hungary is first, he said. There is mutual respect for each other’s patriotic stances: both states are committed to guaranteeing the security of their citizens and protecting the value of equality between men and women, and both believe that the “foundation of the nation” consists of families consisting of a mother and a father and children, who are the foundation stones of the future, Orban said, listing their common points.

He added that both countries have rejected today’s political hypocrisy that disregards the fact that Christianity is the most persecuted religion in the world. Hungary and the US are committed to jointly helping Christian communities in need, he said. Orban noted that Hungary, as a Central European country, has learnt the lessons of history: Central Europeans have always lost out in times of conflict between the East and West. Therefore, Hungary is interested in peace and stability in the region and is very much aware that this can be best achieved through membership of NATO, the world’s most successful defence alliance, he said.

Calling to mind US history, Orban noted that Americans declared their independence 243 years ago and there is no doubt that an exceptional country and nation has been created since then. Viktor Orban – who had not attended an American embassy Independence Day celebration for nine years – assured the US that it can rely on Hungary in the fight for common values, at negotiating tables and on battlefields.

The US ambassador to Budapest David Cornstein said in a speech that Independence Day is a special and extraordinary holiday for all Americans when all gather to celebrate freedom and the rule of law. He praised both the relationship with Viktor Orban, calling him a partner and friend, as well as bilateral relations.

US-Canadian singer Paul Anka performed for the audience of several hundred guests, after the speeches.