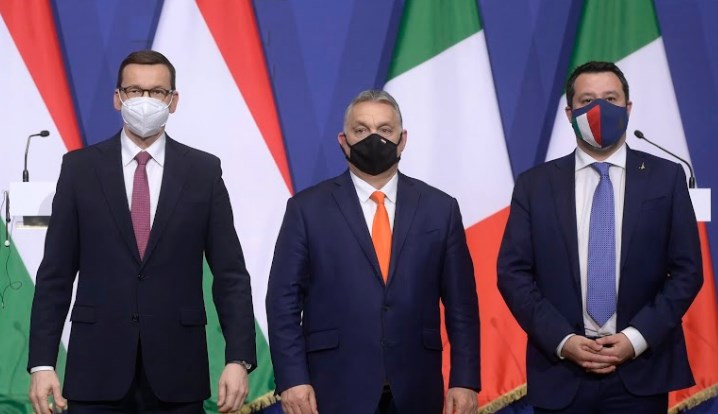 Hungary’s Viktor Orbán has joined forces with Polish Prime Minister Mateusz Morawiecki and Italy’s Matteo Salvini to form a new right-wing political alliance at European level, revealing no details of whether their cooperation would lead to changes in political groups in the European Parliament.

They met in Budapest on Thursday to introduce the alliance, vowing to create a “European renaissance based on Christian values”.

We want a European renaissance, and we will work together to that end. We have clarified all the issues that are important to our nations and our interests do not conflict on any point, Orban said after the meeting.

The trio will meet again in May, most probably in Warsaw, Orbán explained, with the exact date dependent on the epidemiological situation.

After the meeting, Salvini spoke of a “path which begins today and which will continue in several stages in different European capitals, expanding the group.”

“We present ourselves as the historic and founding core” of this alliance, promising “hope” after “the darkest period” since World War II, Salvini added.

If all right-wing parties unite, Salvini said they could form the second largest bloc in the European Parliament and have significant influence.

Polish PM Morawiecki said the plan was to represent “a wide spectrum of opinions and people”.

He advocated “European integration… which respects national sovereignty, the family, Christianity” and the defence of “traditional” values.

The event came two weeks after Orban’s ruling Fidesz party finalized a break with its center-right European political family, the European People’s Party (EPP). That brought an end to years of conflict over Hungary’s adherence to democratic norms and Orban’s construction of what he calls an “illiberal democracy.”