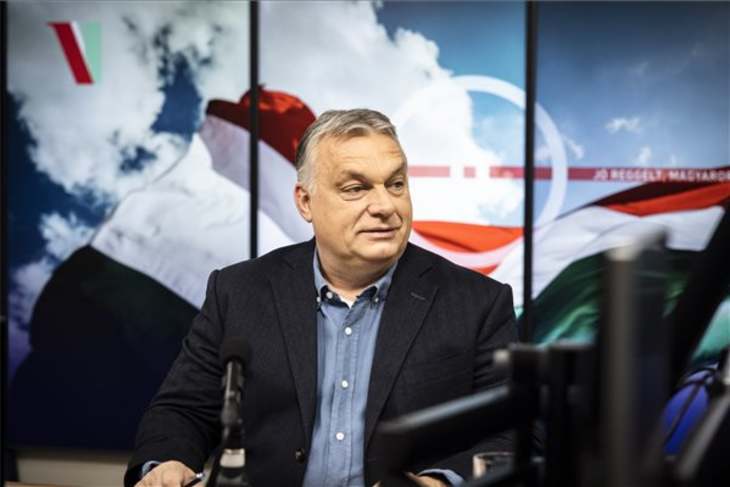 In an interview with Hungary’s public radio (MR1), Prime Minister Viktor Orban talked about his meeting with Russian President Vladimir Putin and the outcome of their talks, as well as the economic situation in Hungary, the V4 news agency reported.

In times of “glaciation,” the current conflict situation, Hungary could serve as an icebreaker between Russia and the West, Hungarian PM Viktor Orban told Hungar’s public radio said in his Friday morning interview. Orban called his Tuesday visit to Moscow “a peace mission of sorts.” Although Hungary is a member of both NATO and the EU, it strives to maintain a good relationship with Russia, which makes the “Hungarian model” completely different from those of most EU countries, he said.

Hungary wants peace, which means we must negotiate, Orban said. He told public radio that during their five-hour meeting, he made nine proposals, eight of which they agreed upon. He said they would engage in “many lengthy talks” with Russia, adding that “the first step was taken by Hungary.” He recalled that Hungary and the Soviet Union had a “bad relationship”, adding however that this era is over, and the Hungarian government wants a different relationship with Russia.

Hungary may be the first country in Europe to be able to push the proportion of fossil fuels below 10 per cent of its energy mix by 2030, Orban said. “Hungary is a climate champion as it is,” and it is also in the forefront in terms of emission reductions. The ongoing projects to develop nuclear (Paks II Power Plant) and solar energy will help Hungary to achieve energy independence, he added. Until then, however, Hungary’s current energy system can only be maintained with Russian gas, he said.

Unlike Western Europe, Hungary has a guaranteed gas supply from Russia, thanks to long-term contracts, so the utility bill cuts are expected to continue, Hungary’s PM said, noting that after his meeting with Mr Putin, the German chancellor and the French president will also pay a visit to Moscow soon.

It has always been in our interest, as Hungarians, that Europe should not organise itself as an empire,” PM Orban said, referring to the EU, adding that otherwise Hungarian independence would always be undermined. “We favour a Europe of nations.” Brussels, however, has a different view and is building a European empire, he added. Brussels would like Hungary to have a servile government, “the kind of government the left always talks about, which would be a jackpot for Brussels” (…), However, “we do not want to win the jackpot for Brussels, but for the Hungarian people, and for that we need to have a national Christian government that stands up for national interests,” Orban continued.

PM Orban outlined Hungary’s economic achievements, pointing out that the minimum wage is up by 20 per cent; the government is restoring the 13th month pension, under 25s will enjoy a personal income tax relief starting from this year, and those raising children will get back their income taxes from last year. “These are achievements that every Hungarian could be rightly proud of,” he said, adding that all this appears in stark contrast to what the Hungarian left wing says.

If, in the meantime, foreign journalists – using their Hungarian “associates” as sources – keep writing nonsense is little short of “annoying,” Mr Orban said, adding however that this has no political significance.

Orban: Brussels lied to EU citizens regarding sanctions against Russia