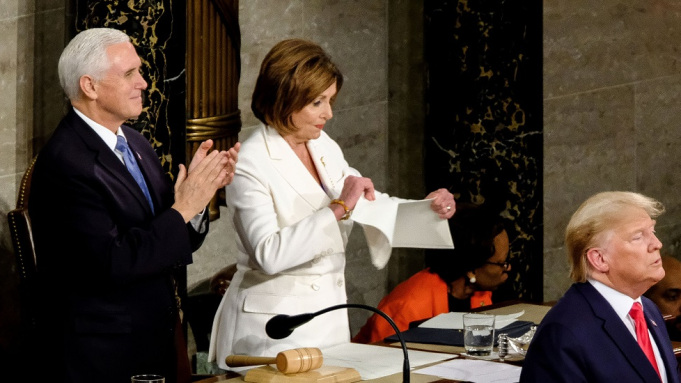 Mandatory Credit: Photo by Shutterstock (10548376j) Speaker of the House Nancy Pelosi holds up a copy of President Donald Trump's speech after tearing it up after he spoke at the 2020 State of the Union Address on Capitol Hill. State of the Union address, Washington DC, USA - 04 Feb 2020

In a dramatic State of the Union address, US President Donald Trump presented his accomplishments over the past three years and honored a great friend and supporter, while the Democratic Party did all it could to express its displeasure with him as it tries to impeach Trump.

In what appeared to be deliberate, Trump did not shake the hand of House Speaker Nancy Pelosi. Pelosi retaliated by tearing up her copy of Trump’s speech after he was done.

Trump used the grand event to honor legendary conservative radio host Rush Limbaugh, who recently revealed that he is diagnosed with advanced lung cancer. The First Lady Melania Trump decorated the teary eyed El Rushbo with the Medal of Freedom as Trump praised him.

Asked whether she had to rip up the speech, Pelosi said that she had worse alternatives for the paper. Some of the Democrats refused to show up, or left the speech early, and nearly all of them sat stone-faced, even as Trump discussed issues that usually draw bipartisan support, such as the economic success of minority groups and honored war heroes that were present. On the other hand, Trump’s supporters were very happy with the speech, believing that it resonated well with the base and will help energize the party in the run up to the elections.

The Democrats have are seeing growing divisions among themselves, as their attempts to choose a challenger to Trump for the November elections are going exceptionally bad, with supporters of leading candidate Bernie Sanders blaming the party of rigging the first statewide race in Iowa.