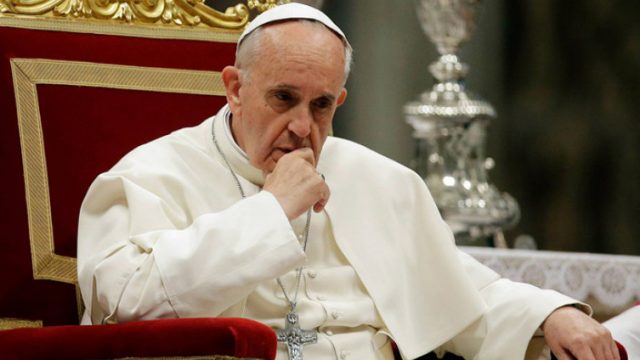 Pope Francis celebrated Easter Mass for the Resurrection of Jesus Christ and is offering the “Urbi et Orbi” blessing from St Peter’s Basilica on Sunday.

Only 200 people were allowed to attend the services because of the anti-coronavirus restrictions and to prevent infection.

Before the pandemic, Easter Mass was usually held in St Peter’s Square in front of tens of thousands of pilgrims.

This year, Francis held the services in St Peter’s Basilica, as he did last year. It was also streamed online.

Easter is the most important feast of the year for devout Christians. The week leading up to Easter Sunday includes many different services that mark the final days of Jesus’ life before his crucifixion.

Already on the previous days, only between 100 and 200 faithful were admitted to the services.

With the “Urbi et Orbi” (To the city and the world) blessing, the pope remits for the faithful the punishment for their sins if they have already redeemed them beforehand, for example in confession or through prayer.

The blessing is usually given at Easter and Christmas and when a new pope has been elected.

Pope Francis also commented on the pandemic’s disproportionate impact on the poor in particular.

And he condemned the continuation of armed conflict, and the strengthening of military arsenals.

He said vaccines were essential and that everyone, particularly the vulnerable, should receive care.

He urged the entire international community, “in a spirit of global responsibility, to commit to overcoming delays in the distribution of vaccines and to facilitate their distribution, especially in the poorest countries.”

He also had words of comfort for those who had lost their jobs or were experiencing “economic difficulties and lack adequate social protection,” saying he hoped public authorities would support those in need.

The pope spoke in support of young people suffering from restrictions around the world, particularly in Myanmar.

And he said he hoped the “light of the risen Jesus be a source of rebirth for migrants fleeing from war and extreme poverty.”

He expressed support for those who are suffering in Lebanon, Syria, Yemen and Libya, and for those in the Middle East, in Africa and in Russia and Ukraine whose lives are affected by poverty and conflict.

“There are still too many wars and too much violence in the world!” he said.

The pope also commented that many were celebrating Easter under severe restrictions and prayed these would soon be lifted.

In Italy, strict contact and travel restrictions are currently in place, with the whole country declared a red zone between April 3 and 5 as the government seeks to prevent visits and the spread of the virus.

Italy, with a population of 60 million, has recorded 110,000 deaths due to Covid-19 since the pandemic began.

After the Easter break, the overnight curfew is back in effect

Commissioner Hahn is accused of conflict of interest