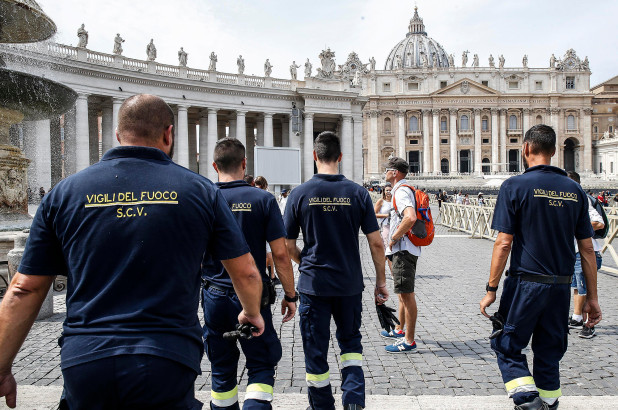 It has long been claimed by supporters of the Catholic faith that God moves in mysterious ways. But so, apparently, does Pope Francis’s personal lift in the Vatican – which broke down on Sunday, trapping the world’s most powerful clergyman inside for 25 minutes, the Telegraph reported.

The 82-year-old pontiff had to be freed by Vatican firefighters after an electrical fault brought his tiny private lift to a halt inside the ornate Apostolic Palace.

He arrived about 10 minutes late for his regular Sunday audience after the rescue team was called to repair the lift and to free him.

“I have to apologise for being late, but there was an accident,” the pope said with a smile. “I was trapped inside an elevator for 25 minutes.”

“Thank God the firefighters arrived, I want to thank them so much.”

The firefighters were quickly summoned from their station inside the Vatican walls just a few hundred yards from where the pontiff was trapped.

Once freed, the relieved pontiff asked the pilgrims gathered in the square to give the fire brigade a round of applause.

The small private lift is known as the “little elevator of Pope Sixtus” because it links the courtyard named after the 16th century pope to the lavishly decorated papal apartment which Francis has shunned since his election in 2013.

He lives at the Santa Marta residence inside the Vatican walls but continues the tradition of blessing the crowds from the palace window every Sunday.

Pope Francis landed in Macedonia with a defective radar system