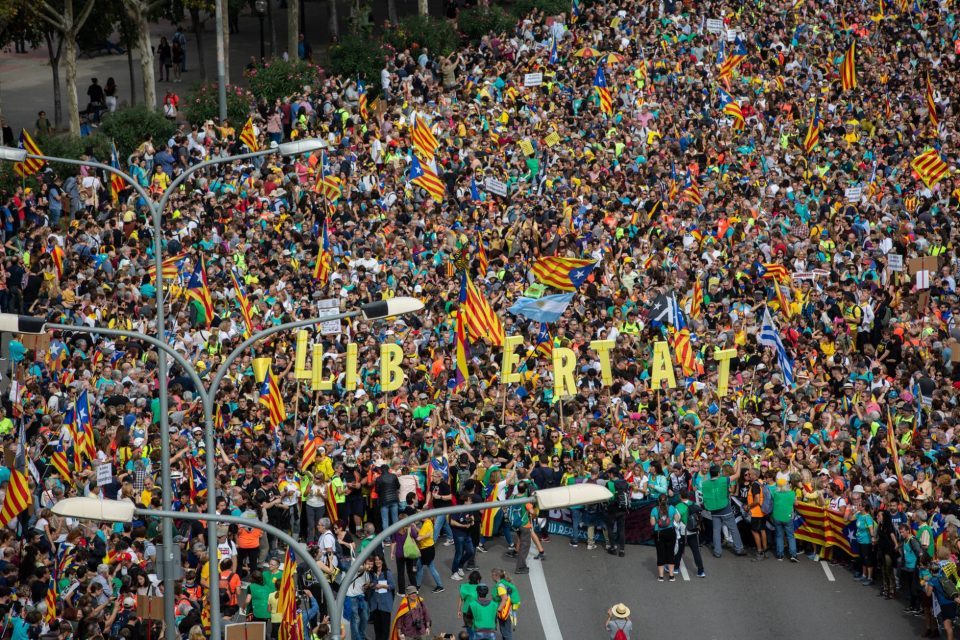 More than half a million people took part in demonstrations in Barcelona on Friday against jail sentences imposed by Spain’s Constitutional Court on nine separatist leaders, according to police estimates.

The main demonstration along the city’s Passeig de Gracia remained peaceful, with protesters demanding the release of the “political prisoners” and singing the Catalan national anthem.

However, a demonstration nearby involving several hundred mostly young people in front of the police headquarters led to renewed clashes with the police.

Masked activists dressed in black threw stones and eggs at police officers, among other things, and set bins on fire. According to the police, three demonstrators, including two minors, were arrested. One official was injured.

A general strike protesting the jail sentences also brought public life to a standstill in Catalonia on Friday.

In Barcelona, protesters blocked the entrances to the landmark Sagrada Familia, forcing the basilica to shut its doors.

A crowd calling for the north-eastern region to secede from Spain formed during the morning outside the famous unfinished basilica designed by the architect Antoni Gaudi.

The basilica said later on Twitter it was closing to guarantee the safety of visitors, staff, and workers.

Demonstrations persisted for a fifth day running, with protesters blocking roads in the region.

Participants included around 30,000 people who had come to Barcelona in five “marches for freedom,” having set off for Barcelona from various cities earlier in the week.

Shops remained closed in parts of Barcelona‘s city centre. “I’ve never seen it this quiet on a weekday,” a caretaker in the district of Eixample said.

The general strike led to dozens of flights being cancelled at Barcelona‘s airport.

The previous day, protesters had set up barricades of burning rubbish bins and furniture in Barcelona, and local media reporting clashes with police.

Spain’s Football Federation on Friday postponed the fixture between Real Madrid and Barcelona scheduled for Saturday due to the political unrest. The “Clasico” will be held at a later date, the federation said.

Catalan leader Quim Torra threatened on Thursday to hold another referendum on whether the region should secede from Spain.

The comment from Torra, who is the head of the regional government, came days after nine former secessionist leaders were sentenced to between nine and 13 years in prison over their roles in an outlawed independence referendum in 2017.

Torra said he was “outraged and upset” about the verdicts, which he described as a “huge farce” and “despicable.”

Numerous people have been reported injured in the unrest that has followed the ruling.

The separatist leadership has spoken out against the violence, calling for the demonstrations to be peaceful.

The sentencing of the separatists came some two years after they pushed forward with a referendum on whether to declare Catalonia an independent state.

The longest sentence, 13 years, was given to the region’s former vice president, Oriol Junqueras. Media reports have speculated that the convicted separatists could be freed after serving a quarter of their sentences.

According to Brussels prosecutors, he was shortly detained, a judge then ordered his conditional release. Puigdemont was ordered to return to court on October 29.

The Belgian authorities did not comply with an earlier extradition attempt. He fled Spain following the 2017 referendum.