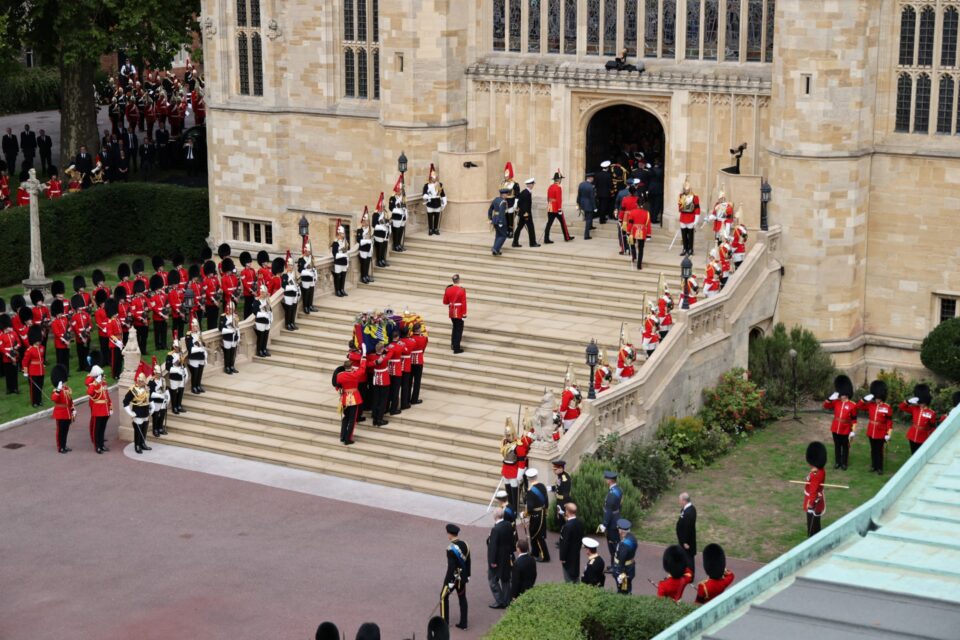 In Britain, the royal family has bid farewell to their beloved matriarch and the nation’s longest-reigning monarch in a place which has been the setting for both joy and sorrow for the Queen.

Mourners at the committal service in St George’s Chapel at Windsor Castle included the late Queen’s nearest and dearest, her household staff past and present, and foreign royals.

At 3.28pm, the Queen’s granddaughter Zara Tindall arrived with her husband Mike, soon followed by Princesses Eugenie and Beatrice, and their mother Sarah, Duchess of York.

By 4pm the organ music began to swell, but within a few minutes the sound of the pipers and drummers outside was overwhelming the music inside the chapel.

For those facing the aisle with the West Door to their left, the sound of the organ could be heard coming towards them from the right while the outside band’s music was making its way in on the left.

At 4.09pm, the Queen Consort, the Princess of Wales, Countess of Wessex and Duchess of Sussex made their way to the side of the West Door in preparation for joining the procession.

Prince George’s fair hair could be seen just over Camilla’s shoulder as the royals watched the procession enter.

At 4.12pm the coffin was carried in, and briefly paused at the door.

The Imperial State Crown, Orb and Sceptre all twinkled as the lights inside the chapel danced off the dazzling jewels.

Then the procession continued up the aisle as the waiting royals joined.

Outside, bunches of flowers created a floral carpet, while a rainbow of colours came from bouquets of red roses, pink lilies, potted plants and wreaths.

Inside one of the main entrances a decadent floral arrangement of white blossoms sat in full bloom.

Among the flowers inside the chapel were lilies, dahlias, roses and greenery including eucalyptus picked from Home Park.

A wreath from Number 10, signed by Prime Minister Ms Truss, was placed close to the door of the chapel, and said: “For a lifetime of devotion and duty we offer our deep and sincere gratitude.”

As the 800 mourners sat and waited for the state hearse to arrive, daylight streamed in through the West Door and through the many windows around the nave.

Bright lights rigged up along the sides shone upon the congregation towards the aisle.

Waiting for the service to begin, the congregation may have reflected on the fact that in this gothic chapel, steeped in history, the Queen experienced some of life’s happiest and saddest moments.

And the castle, just a short walk up the hill, is where she spent most of her time in her later years.

During the Covid-19 pandemic, the Queen was ensconced in the ancient royal fortress with her late husband, her “strength and stay”, the Duke of Edinburgh.

Philip’s funeral was held when coronavirus restrictions were in place in April 2021 with the numbers strictly limited and the final farewell taking place entirely within the confines of the castle.

The image of the Queen sitting alone in St George’s Chapel, socially distanced from her family as she mourned, became one of the defining images of the pandemic.

Funerals such as those of Princess Margaret and Princess Alice, Duchess of Gloucester, have also taken place in the chapel which is situated in the lower ward of Windsor Castle’s precincts and is already the resting place of 10 monarchs. The funeral of the Queen’s father, King George VI, took place in St George’s Chapel on February 15, 1952.

But there have been joyful times too. In May 2018, Prince Harry married Meghan Markle – now the Duke and Duchess of Sussex – in a glittering ceremony. Later that year, in October, the Queen’s granddaughter Princess Eugenie married Jack Brooksbank in another royal wedding showstopper. Before the turn of the century, the Earl and Countess of Wessex tied the knot in St George’s in June 1999.

A few years later, in 2005, a service of dedication and prayer was held in the Chapel following the marriage of the King and the Queen Consort.

It was where Harry was baptised and where his brother William, now the Prince of Wales, was confirmed.

But on this third Monday of September 2022, it was time for the Queen’s family to say goodbye to a mother, grandmother and great-grandmother.

Before 4.15pm, the coffin proceeded through the nave, passing over the vaults of Henry VIII and Charles I.

Tradition ran through the service, with perhaps the Queen’s reputation for constancy and consistency prevailing until the very end. The service was discussed with the Queen over a number of years and all the prayers and hymns were chosen by her – apart from one.

She left one hymn to be chosen at the time, and after a discussion between the King and the Dean of Windsor David Conner, the hymn chosen was Westminster Abbey adapted from the Alleluyas in Purcell’s O God, Thou art my God.

Much of the service had a feel of looking back, repeating what has gone before, and of coming full circle.

Prior to the final hymn, the Imperial State Crown, the Orb and the Sceptre were removed from the coffin by the Crown Jeweller and, with the Bargemaster and Serjeants-at-Arms, were passed to the Dean who placed them on the altar.

The removal of the crown from the coffin to the altar was a poignant moment, because in 1953 the crown was taken from the altar in Westminster Abbey and placed on the Queen’s head at her coronation, marking the start of a 70-year reign. At the end of the final hymn, the King placed the Queen’s Company Camp Colour of the Grenadier Guards on the coffin.

At the same time, The Lord Chamberlain broke his Wand of Office and placed it on the coffin. This was to create a symmetry with the three Instruments of State that had been removed.

The coffin, which was placed on a catafalque draped in purple velvet, was slowly lowered down into the royal vault as the Dean of Windsor said: “Go forth upon thy journey from this world, O Christian soul.”

The chapel was completely silent as the Sovereign’s Piper played a lament, A Salute To The Royal Fendersmith, from the doorway between the chapel and the Dean’s Cloister.

As he played, he walked slowly towards the Deanery in the Cloister and the sound of the music gradually faded away. During the service, the King sat in the seat which was occupied by the Queen on the occasions when she came to the chapel, positioned closest to the altar.

Tradition ran through the service in its music too as it featured several pieces that were also heard at Philip’s funeral and other major royal events.

JS Bach’s Schmucke Dich, O Liebe Seele – Adorn Yourself, O Dear Soul – (BWV 654) a piece for organ, was played as the mourners waited for the service to begin. Another was Vaughan Williams’ Rhosymedre, a firm favourite with the royal family with the music being performed at the wedding of Charles and Diana, and at Philip’s funeral.

Nimrod by Sir Edward Elgar was heard at the Queen’s coronation in 1953 and was also played before the committal began.

The service ended with Bach’s Prelude And Fugue In C Minor (BWV 546) played after the national anthem, which was also heard at the end of Philip’s funeral.

Prayers were said by the Rector of Sandringham, the Minister of Crathie Kirk and the Chaplain of Windsor Great Park, and by the Dean of Windsor.

The Choir of St George’s Chapel – made up of 11 men, one woman and 13 boys – was conducted by James Vivian, director of music, and the organ was played by Luke Bond, assistant director of music.

Much of the music at the service was composed by Sir William Harris, who served as the organist at St George’s Chapel between 1933 and 1961, taking in much of the Queen’s childhood.

The young Princess Elizabeth would often visit the organ loft to watch Sir William play, and it is believed he taught her to play the piano.

The Dean of Windsor’s bidding, which was written after the Queen’s death, included the words: “Here, in St George’s Chapel, where she so often worshipped, we are bound to call to mind someone whose uncomplicated yet profound Christian faith bore so much fruit.

“Fruit, in a life of unstinting service to the nation, the Commonwealth and the wider world, but also (and especially to be remembered in this place) in kindness, concern and reassuring care for her family and friends and neighbours.

“In the midst of our rapidly changing and frequently troubled world, her calm and dignified presence has given us confidence to face the future, as she did, with courage and with hope.”

The Queen will be buried with her late husband Philip in the King George VI Memorial Chapel – an annex to the main chapel where her mother and father were buried, along with the ashes of Princess Margaret.

A private burial service, attended by the King and other members of the royal family, will take place on Monday evening.

Philip’s coffin will move from the royal vault to the memorial chapel to join the Queen’s.