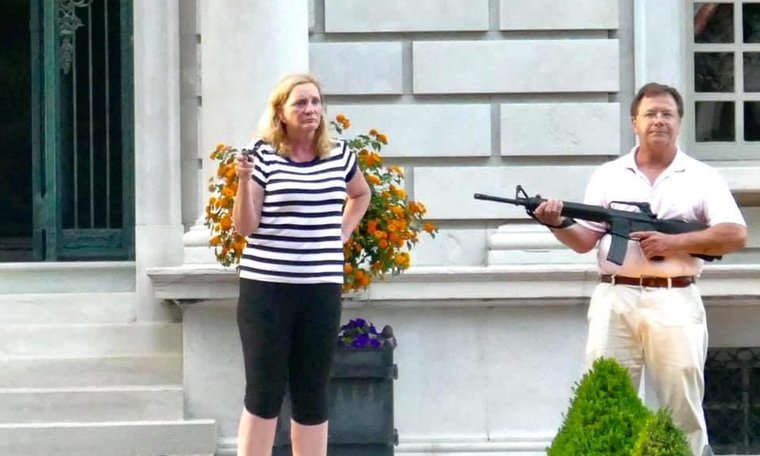 A prosecutor whose campaign was supported by leftist billionaire George Soros has announced that she will go after a couple in St. Louis who famously defended their home from Black Lives Matter protesters.

St.Louis Couple Patricia and Mark McCloskey owners of McCloskey Law Center was pointing their assault weapons at protestors ‘claiming’ to protect their properly. Didn’t know they own the streets and sidewalks? pic.twitter.com/efsC1CKPNQ

Much of the left-wing media took the protesters’ side but uncut footage shows how BLM protesters entered the McCloskey residence through a gate clearly marked “private property” and violated trespassing laws.

Commenting on the incident, local District Attorney Kimberly Gardner stressed that she was cooperating with police and that an investigation would be launched into what exactly happened. She said: “The Cirucit Attorney’s Office will not tolerate the use of force or intimidation to affect the rights of individuals to peacefully protest and to protect their First Amendment right.”

As reported by the V4 news agency, Gardner has close ties to billionaire George Soros. The African American prosecutor applied for her current post in 2016 and received sizeable amounts from the stock market speculator. She campaigned with a promise to reform and rebuild social trust in the criminal justice system and reduce the number of violent crimes.

Gardner received over 67 thousand dollars from a political action committee (PAC) called Safety and Justice that can be linked to George Soros, The Missouri Times reported back in 2016. Gardner used part of the money to finance an advertising campaign.

Kimberley Gardner is also affiliated with the Democrats and is an ardent supporter of the Black Lives Matter movement. In a public debate earlier, she butted heads with Missouri’s Republican Attorney General Eric Schmitt, whom she simply described as a “Trump wannabe”, according to Fox News.

Earlier, Mr Schmitt had criticised Ms Gardner on Twitter for allowing the release of 36 rioters, who were arrested for offences committed during the violent protests over the death of George Floyd. Citing a KMOV-TV report from February, Fox News also reported that the rate of convictions under Gardner has taken a nosedive. According to figures, the prosecutors managed to achieve guilty verdicts in 51 per cent of the cases in 2018, and in 54 per cent of the cases in 2019.