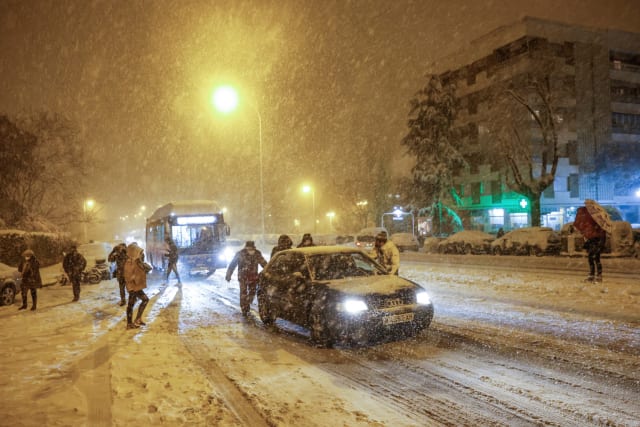 Spain mourned the deaths of four people on Sunday after storm Filomena brought record snowfall in the capital, Madrid, and paralysed transport throughout the country.

A homeless man froze to death in a park in central Madrid, bringing the death toll to four. The other victims included a man who had been found dead after his car was buried in masses of snow, and a couple in southern Spain whose vehicle was swept away by floods.

Snow fell for 30 hours until Saturday evening but bitter cold is expected to follow, with temperatures forecast to fall to minus 10 degrees Celsius in Madrid and other parts of central Spain in the coming week.

Regional president Isabel Diaz Ayuso called on citizens to shovel snow before it turned to ice, which could be treacherous, she said.

Officials also urged caution, as the masses of snow on rooftops could freeze, forming dangerous blocks of ice.

In Madrid alone, almost 1,500 people trapped in their vehicles by snow had to be rescued, with some not freed until late Saturday.

Unable to heat their cars, some suffered hypothermia, while others spent a night without water, blankets or food, newspaper El Pais reported.

Madrid’s airport, city buses and regional trains all stopped running until midday on Sunday, and the railway company cancelled all connections.

Water pipes froze in many homes, while in others, heating and power supplies failed. The 4,500 people in the Canada Real shanty town in the greater Madrid region were particularly hard hit, as people have been living there without electricity for months.