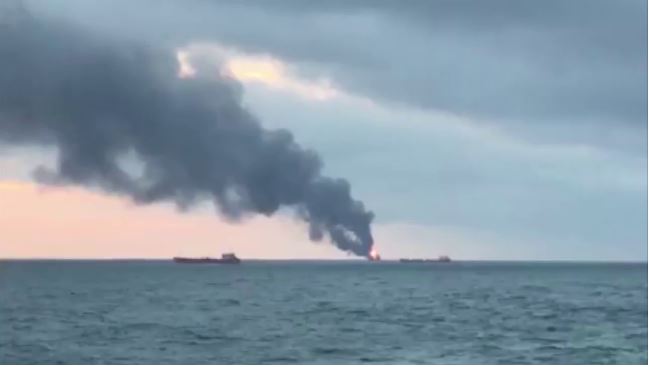 Ten crew members have been found dead and 14 have been rescued after two ships caught fire in the Kerch Strait near Crimea, Russia’s transport ministry said on Monday with a rescue operation still underway, Reuters reports.

The ministry said earlier on Monday that crew members were jumping into the sea to escape the blaze, which probably broke out during a ship-to-ship fuel transshipment.

Both ships were under the Tanzanian flag – Candy (Venice) and Maestro – and had a combined total of 31 crew members. Of them, 16 were Turkish citizens and 15 from India, it said.

An industry source told Reuters there were stormy conditions in the sea when the incident happened.

The Kerch Strait between Russian-annexed Crimea and southern Russia controls access from the Black Sea to the Azov Sea, where there are both Russian and Ukrainian ports.

In November, Russia detained three Ukrainian navy vessels and their crews in the Black Sea near the Kerch Strait, fuelling tensions between the two countries. Russia annexed Crimea from Ukraine in 2014.