Soros is making arrangements to avoid his biggest fear, that his image will sink into oblivion. In a bid to strenghten his personal cult, he wants to maintain the ‘Soros myth’ through his organisations as long as he can.

George Soros has considered himself some kind of God since his childhood, something he wrote about in his book “The Alchemy of Finance”. He also talked about his messianic complex in his 1993 interview with the Independent.

“It is a sort of disease when you consider yourself some kind of God, the creator of everything, but I feel comfortable about it now since I began to live it out,” he said then.

In an article published in The New Yorker, he said he resembled the God of the Old Testament. The article also points out that the speculator wanted to do more than just make money, so he set up his foundation – which operates like a sect – through which his money and influence has reached numerous countries around the world. According to his former colleagues, this was how he wanted to achieve the immortality he yearned after.

Although Soros is understandably afraid of death and being forgotten, his approach to the death of others, including even his own parents, is entirely different. In his study on the legalisation of euthanasia and the US health care reform published by the Open Society Foundations, he discusses the death of his father and mother.

He writes that his elderly mother moved into a US private institution promoting euthanasia called the Hemlock Society, where she “had at hand the means of doing away with herself.” The essay also reveals that the billionaire, a self-professed God of sorts, would have actively contributed to the death of his own mother.

“I asked her if she needed my help. I offered it … But I would have helped her, as I felt that I owed it to her,” he wrote. 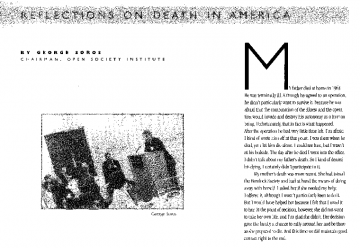 In the same essay, Soros also explains that healthcare workers are poorly trained to deal with fatal illnesses. He writes: “the doctors and nurses are working to prolong life, instead of preparing a patient for death.”

According to his former colleagues, Soros established his foundation to avoid the much-dreaded outcome of fading into oblivion and to achieve immortality. However, his plan was not received favourably everywhere, as many countries grew tired of the American specualtor’s unsolicited intervention in their affairs in recent decades. (As we have pointed out in Part II, George Soros never had the courage to test his support base in an election.)

In October this year, Dr Steve Turley, a conservative scholar and thought leader, published a Youtube video compiling the countries that oppose George Soros’s idea and the rise of an open society.

In 2013, Turkey’s president accused the speculator of supporting the protests being staged at the time. Recep Tayyip Erdogan says that George Soros assigns people the task of dividing and ruining nations. In 2018, when the investigation into the 2013 protests was reopened, Soros’s foundation closed its office in Turkey to avoid being held to account.

In 2015, the General Prosecutor’s Office in Russia banned two branches of Soros’s network, the Open Society Foundations and the Open Society Institute Assistance Foundation, arguing that the activities of these two foundations represented a threat to Russia’s constitutional system of and state security.

In 2017, Soros’s foundation was forced to close down its office in Pakistan after its application to register had been rejected. Pakistan’s interior ministry gave the foundation 60 days to leave the country.

Apart from the above countries, other states have also voiced their opposition to the aggressive expansion of Soros’s network, the idea of extreme liberalism and an open society, which Mr Soros represents and which he wants to force on countries around the world. In a 2019 interview he said: “open societies are on the defensive.”

Fearing that his ideology will be rejected by an increasing number of people, Soros donated most of his wealth, 18 billion dollars, to his foundation in 2018. With that move, he has ensured the organisation’s smooth functioning for years to come, in an attempt to avoid his biggest fear: that the ‘Soros image’ will be forgotten. In a bid to strengthen his personal cult, he wants to maintain the “Soros myth” through his organisations as long as he can.