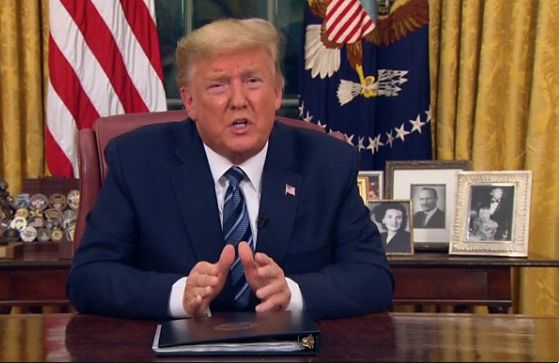 “Nothing would be worse than declaring victory before the victory is won,” Trump said during a press conference as he extended the federal orders, which were set to expire next week.

The federal guidelines are coupled with state and local orders that have shuttered non-essential businesses across the country and brought much of the world’s largest economy to a standstill in an attempt to slow down the spread of the new coronavirus.

Trump had previously said he wanted the economy to largely reopen by the April 12 Easter holiday. However, a visibly worsening nationwide outbreak – with the US now leading the world in coronavirus case numbers – has apparently forced him to backtrack.

Trump called his Easter deadline “aspirational” on Sunday, saying he expects the death rate to peak by Easter and hopes the US will “well be on our way to recovery” by June 1.

Anthony Fauci, a top public health official, warned on the same day that the US death toll from the novel coronavirus could surpass 100,000 and millions could be infected.

In response, Trump said his administration would be doing a “good job” if the deaths are limited to 100,000, since an earlier projection said up to 2.2 million people could die in the US.

He appeared to be citing an estimate from Imperial College in London based on a scenario without any efforts to suppress the outbreak.

His administration has been widely criticized by public health officials for a lag in providing widespread coronavirus testing that could have better informed the response.

So far there have been more than 2,400 deaths and over 140,000 confirmed cases in the US, according to Johns Hopkins University data.

“We’re hoping the [prediction] models are not completely right, that we can do better than what the predictions are,” Deborah Birx, another top White House official handling the pandemic said Sunday. “We have to do better.”

New York state, which accounts for almost half of US cases, reported its largest single-day jump in deaths on Sunday at 237, Governor Andrew Cuomo said Sunday, bringing the state’s death toll to at least 965.

Hotspots were also emerging in Louisiana, California and Illinois.

Louisiana Governor John Bel Edwards said Sunday that cases in the US state are “on a trajectory to overwhelm our capacity to deliver health care by the end of the first week in April,” in comments to broadcaster ABC.

State and local officials around the country were urging people to stay home to slow the spread of the virus and reduce the load on the medical system.

Jurisdictions across the US were also scrambling to obtain more ventilators, a potentially life-saving piece of medical equipment for people suffering from severe cases of Covid-19, the disease caused by the virus.

Speaker of the House Nancy Pelosi on Sunday accused Trump of having denied the true extent and severity of the pandemic, charging that this decision cost lives.

“His denial at the beginning was deadly,” Pelosi said on CNN on Sunday, as the US death toll passed 2,000 on Saturday.

Pelosi accused Trump of having done too little in the initial weeks, and criticized his refusal until last week to use his powers to force the private sector to produce essential medical equipment.

“We cannot continue to allow him to make these underestimations about what is happening here,” Pelosi said.

The Democratic leader added that a fourth stimulus package – on top of the 2-trillion-dollar package signed into law this week – is needed to aid the economy and bolster state and local government budgets.

Trump said he would consider a fourth stimulus package if the economy needs it.

The president continued to blast the media on Twitter and in his press conference for what he says is a biased portrayal of his administration’s virus response.

He touted the large viewership numbers of his near-daily press conferences, saying the “Lamestream Media is going CRAZY.”

Trump also admitted to not speaking with governors he dislikes, specifically pointing to Democrat Jay Inslee of Washington, despite his state being particularly impacted by the pandemic.