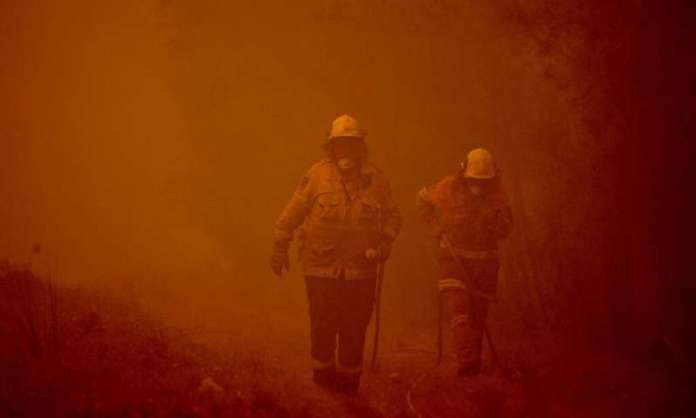 Authorities were assessing the damage after firefighters battled flames fanned by strong winds through the night and lightning strikes sparked new blazes in New South Wales and Victoria, Australia’s most populous states. Conditions were milder Saturday and forecast to remain relatively benign for the next week.

A man suffered burns protecting a home near Tumbarumba in southern New South Wales and was airlifted to a Sydney hospital in serious condition to undergo surgery, Fitzsimmons said.

Several firefighters received minor burns and one suffered shortness of breath, but they were not admitted to a hospital, he said.

With no heavy rain expected, the 640,000-hectare (1.58 million-acre) blaze that formed overnight when two fires joined in the Snowy Mountains region near Tumbarumba, close to the Victorian border, is expected to burn for weeks, officials said.

The fire crisis in Australia has killed at least 26 people, destroyed more than 2,000 homes and scorched an area larger than the U.S. state of Indiana since September.