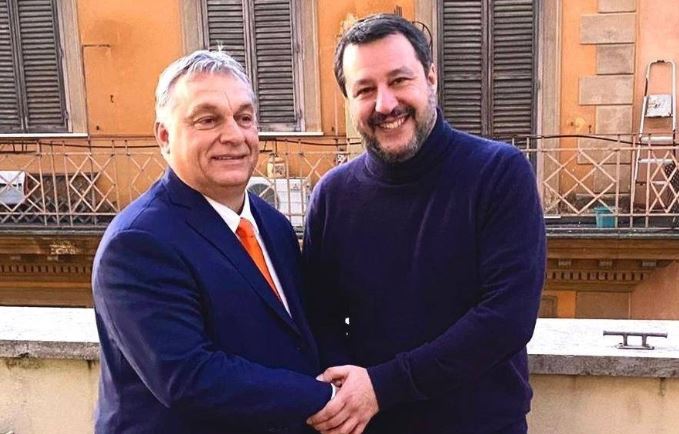 During a panel discussion at the National Conservatism Conference organised by the Edmund Burke Foundation in Rome on Tuesday, Prime Minister Viktor Orban described economic success as a prerequisite to conservative politics. The Hungarian premier travelled to Italy on Monday where he met Lega chief Matteo Salvini and Italy’s former Prime Minister Silvio Berlusconi, the leader of the right-wing Forza Italia party, the V4 news agency reported.

Achieving economic success is the only way for national conservative and Christian democratic leaders to “survive”, Hungary’s premier told a podium discussion at the National Coservatism Conference. If a conservative political leader makes a mistake and economic indicators fall as a result, the leader will be “murdered the next day,” he added. Viktor Orban pointed out that Hungary’s economy is experiencing an annual growth rate of around 4-5%, adding that unemployment had dropped to 3% and the public debt was also shrinking. He stressed that Hungary was a stable country, the only one in Europe not to have held snap elections since 1990.

Orban said the main difference between Hungary’s conservative leadership and other conservative European governments was that Hungary’s ruling parties were not under pressure to form a coalition with other political parties, given their outright majority in parliament. Another difference was the media landscape, he said, adding that unlike Hungary, 90 per cent of the press in Western Europe belongs to “the progressive liberals and only 10 per cent to the conservatives.” Hungary has more of a balance in this regard, Mr Orban said, stressing that this made him “the lucky one among European conservative politicians,” who gets to speak his mind.

Reacting to accusations of populism, Mr Orban said that when he was young, a populist politician was someone who was unable to deliver on their promises. However, if a politician makes a pledge and delivers, it’s no longer populism but democracy, he added. Citing an example, he said that back in 2010 his government had promised to create one million jobs over a ten-year period and has managed to add 860,000 jobs to the economy in nine years.

He criticised liberalism and said that liberal governments failed twice within a single decade. First in 2008, when they proved unable to properly handle the economic crisis, and then in 2015, when they failed to protect their citizens and their countries’ borders during the migration crisis. In this sense, liberal democracy has come to an end, Mr Orban said, emphasizing the need for something new, for liberalism to be replaced by Christian democracy.

Regarding the migration crisis, the Hungarian prime minister noted that there is not a single Muslim migrant in Hungary, whereas the situation is entirely different in Western European states that boast growing Muslim populations and Christian communities are decreasing. The liberals perceive this as a positive trend because they “dislike Christian society,” Mr Orban said, noting that it was “their business” so long as they don’t try to force such a trend onto Central Europe.

At the same time, the migrant crisis had opened the door to discussions about identity, about “who we are”, Viktor Orban said.

With regard to the EU, Mr Orban said there were two opposing views as to how Europe should be organised: one vison is to build the continent from the bottom up, which would entail some form of cooperation between the nations. According to the other concept, however, Europe should be built from the top down, which is a federalist, “empire-oriented” approach leaving no room for sovereign states. The two views are in constant competition with one another, leading to unresolved disputes among EU leaders, the Hungarian prime minister added.

Regarding the European People’s Party, of which Hungary’s ruling Fidesz is a member, Viktor Orban noted that the conservative grouping was determined to be a part of the EU’s power structure at any cost. He said if this meant giving up certain values and making compromises with the left, then the party family would do so, slowly losing its identity in the process. Unless the EPP “starts a new chapter”, Mr Orban said, it would keep moving “in the leftist, liberal direction, because pressure from the media and universities among other places would force it to give up more and more aspects of its original ideology.” He added that he would attempt to carry out a “counter-revolution” to this trend. As regards the state of Central Europe, the Hungarian prime minister said it was Europe’s most successful region today. He said whenever he talks about Hungary’s achievements, he must also mention the successes of other countries in the region such as Slovakia, the Czech Republic, Poland, Croatia and Serbia. Mr Orban said that irrespective of these countries’ European political families, they all had nationally minded conservative governments.