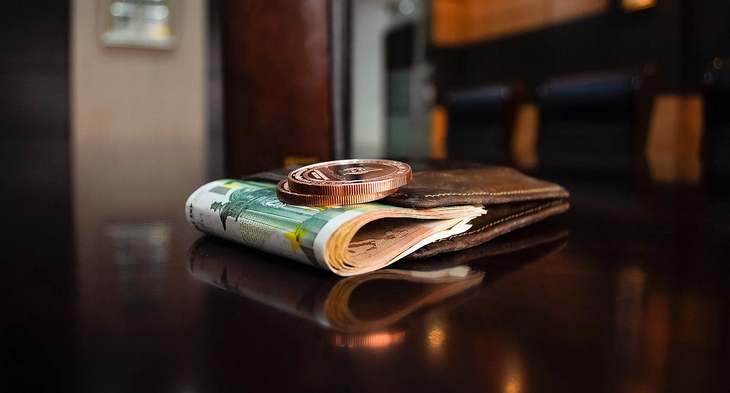 The V4 news agency asked leading Brussels bureaucrats about their thoughts on the fact that in some EU institutions and member states politicians are not bound by strict rules to declare their assets, which creates a loophole for possible corruption. Apparently, Brusselites are not particularly concerned, the agency reports.

Applying double standards has always been common practice in Brussels, and the fact that something seen as a flaw in one member state can be a preference in another comes as no surprise. Leaders in Brussels exercise the same inconsistency and double standards when asked about their own accountability. While they expect all other politicians to declare their assets and report on any increase in their wealth, they remained eerily silent when we asked them about the risks of corruption in the EU.

We have asked top EU leaders about their thoughts on the fact that while politicians in some EU countries are required to declare their assets in line with strict rules, there are no such obligations in place in other member states. We have wanted to find out what they made of the fact that politicians in European institutions are not required to submit declarations about their assets and any changes taking place in their financial situation. Commission President Ursula von der Leyen, Vice-Presidents Vera Jourova and Frans Timmermans, and European Parliament President Roberta Metsola all appear unfazed about the possibility that the suspicion of corruption may cast its shadow over the Brussels bureaucracy.

As previously reported by V4NA, MEPs are not required to publicly disclose what real estates or high-value movables (for instance, cars or art collections) they possess. Neither are they obliged to declare how much savings or debts they have. Consequently, European taxpayers are unable to keep track of increases in their MEPs’ wealth during their terms in office. The most ardent advocates of transparency, Guy Verhofstadt, leader of the liberal ALDE group, and EPP president Manfred Weber, do not disclose their assets to the public, yet there are member states where politicians are obliged to declare every asset they own, with some EU countries requiring annual updates in their asset declaration documents. 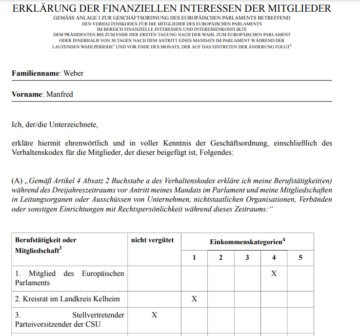 Given the laxity of the rules, it is no wonder that MEPs sometimes get caught up in corruption scandals. V4NA was the first to report that Manfred Weber had chosen his own family home as his party office, allowing him to pocket an additional 5,000 euros each month. He could have tricked the budget out of at least 400,000 euros until his chicanery was exposed by V4NA’s journalists.

Bureaucrats in Brussels often claim that transparency is a key element of the European Union’s values, while the members of the European Commission are not required to account for their assets. They have to prepare a so-called declaration of interest document. They must declare all the positions they have held in the past ten years and any financial interests that could give rise to a conflict of interest, along with any positions they hold in bodies that have a public function. However, their real estates, movable assets, investments and savings do not have to be included in the declarations. 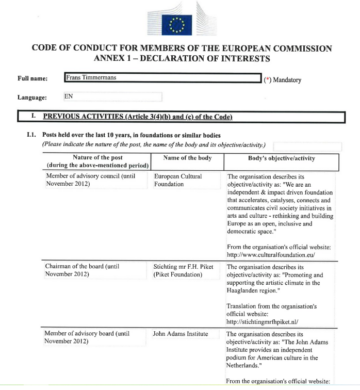 Not all member states require MPs and high-ranking officials to disclose their assets. In the Netherlands and Cyprus, there is no law in force that would oblige politicians to give an account of their assets and financial statuses to voters. In the Netherlands, lawmakers are only required to make public if they hold any other positions outside of parliament, as well as the details of their foreign trips, provided that the costs of these trips are financed – in part or in full – by a third party.