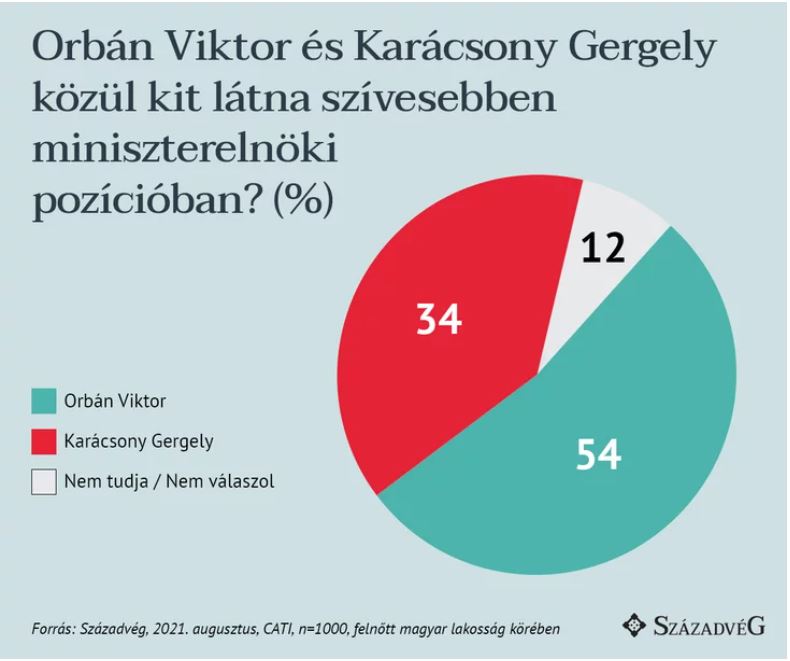 Prime Minister Viktor Orban has a 20 per cent lead over the current mayor of Budapest, one of the left-wing candidates aspiring to run for the office, in terms of the number of people who would pick him as Hungary’s next prime minister. Hungary will hold parliamentary elections in the spring of 2022, the V4 news agency reported.

54 per cent of Hungary’s adult population would favour Viktor Orban in the prime ministerial position, while support for Budapest’s current mayor, Gergely Karacsony, one of the left-wing candidates aspiring to run for the post, stands at 34 per cent, the latest public opinion poll by Szazadveg Research Institute found. Hungary’s left-wing will stage primaries before the 2022 parliamentary elections and have a joint prime ministerial candidate in the vote. As analysts expect Budapest mayor Gergely Karacsony to become the left’s joint prime ministerial candidate, Szazadveg Research Institute gauged voters’ opinion in this context.

On the one hand, their study sought to find out whether voters would prefer Viktor Orban or Gergely Karacsony in the prime ministerial position. On the other hand, the research aimed to reveal which of the two potential candidates voters saw as more capable of improving the situation of certain priority social groups and solving Hungary’s most important issues. Besides asking people to assess the leadership qualities of both candidates, the poll aimed to reveal which of the two politicians was considered to be more suitable for solving problems in a number of relevant areas, the researchers write in the summary of survey results. The Covid pandemic as the biggest global crisis of recent times has challenged the everyday lives of individuals and families and affected every segment of social existence. These are times when people line up behind determined and strong leaders.

Dealing with the epidemic poses major challenges from both a healthcare and an economic perspective. In both areas, the majority of the Hungarian population appear to trust in Viktor Orban with 57% of respondents considering him better suited to improve the economic situation after the crisis, and 32% finding Gergely Karacsony to be more suited to the task. In managing protection of public health against future waves of the epidemic, 52 per cent of respondents voted in favour of Viktor Orban, while only 20 per cent for Gergely Karacsony.

Szazadveg also asked people to assess the government’s crisis management methods and the post-epidemic economic restart, where there also appears to be a sharp contrast in the evaluation of the two politicians. According to 55 per cent of respondents, Gergely Karacsony would raise taxes, and 52 per cent believe that his restart would involve austerity measures. In contrast, only 24 per cent presume a tax hike, and 29 per cent an austerity package from Viktor Orban. Respondents view Mr Karacsony as the embodiment of Hungary’s pre-2010 austerity policy. While 58 per cent consider Viktor Orban to be suitable for creating new jobs, only 29 per cent see Gergely Karacsony as capable of contributing to new job creation.

In summary, most people not only consider Orban to be a strong and determined leader, but also view him as a politician who’s handled the crises well and proved that he stands up for priority social groups. In addition to merits in domestic problem-solving, cultivating foreign relations is at least as important. In this regard, according to 59 per cent of Hungarians, PM Orban better defends the country’s interests, as opposed to only 30 per cent, who believe this to be true of Gergely Karacsony.

Poll shows VMRO more that four points ahead of SDSM