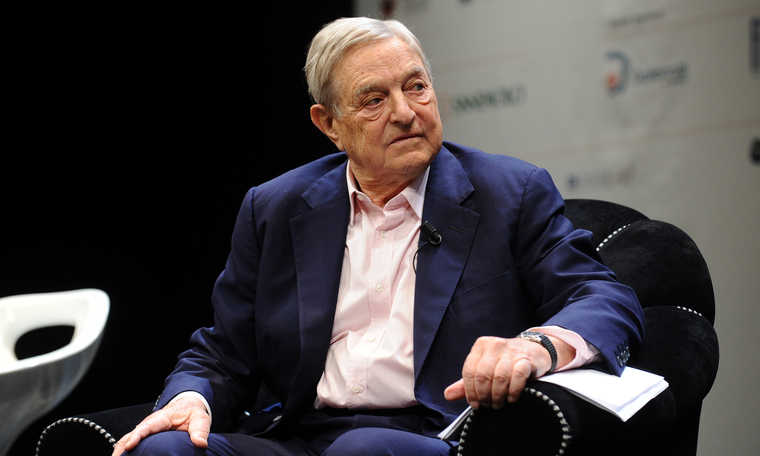 Italy has witnessed the emergence of a new civic movement recently. The group called “Sardines” plans to step up against right-wing political forces with a particular focus on former Interior Minister Matteo Salvini’s anti-immigration Lega party. The organisation comprising a number of pro-migration members also took part in the regional elections in late January. The new star of Italy’s left wing is a woman named Elena Ethel Schlein, who is linked to George Soros, just like the Sardines movement, the V4 news agency reports.

in January George Soros returned as an old friend to the alpine town of Davos, Switzerland, to deliver his address at the World Economic Forum. The billionaire speculator announced that he would gift $1 billion to launch a global university network. His initiative called Open Society University Network is aimed at preparing future generations for global challenges. Besides the announcement, Soros criticized US President Donald Trump and Chinese leader Xi Jinping, saying they pose a threat to open societies.

Soros’s announcement and his critique of the leaders of the two global superpowers have, however, diverted people’s attention from his remarks on Italy’s former anti-immigration interior minister, Matteo Salvini.

According to Italian newspapers, the stock exchange speculator praised the “Sardines” movement, describing its members as “sharks” that are predestined for victory. Soros said “Sardines” was a spontaneous grass-roots movement created by young people against Lega’s anti-immigration chief, Matteo Salvini, whom he described as a “potential dictator”.

Salvini took to Twitter to respond to Soros’s remarks, saying “The mask fell off! Soros, the financier, supports the Sardines and believes that Salvini is “a potential dictator”. Can you see on whose side they are?” he asked. “Soros is with the Sardines, and he is the last thing that we need: the efforts of the mainstream and financial powers to defend the last red fortress are impressive! If we also win in Emilia-Romagna, we will send the current government and Italy’s globalists packing,” the politician wrote.

The “Sardines” group was set up last year by four young Italians from Bologna – Mattia Santori, Roberto Morotti, Giulia Trappoloni and Andrea Garreffa – who objected to Salvini holding a campaign event in Bologna for his Lega party. They use Facebook to organise their actions and they try to stage protests in cities where Salvini or the Italian right wing is known to hold rallies.

It is interesting to examine who are the ones that organise the stunts and rallies of the Sardines movement. Stephen Ogongo is the head of the Rome Sardines and founder of the Cara Italia party, which wants to make it easier for migrants to obtain Italian citizenship and voting rights. Fabio Cavallo works at the movement’s Milan and Lombardy branches and is involved with Italy’s anti-fascist network. He had organised a fundraiser for Carola Rackete and the Sea Watch NGO, collecting nearly €300,000. Emiliano Leone also works for the group in Milan as a member of the Erasmus Generation, funded by George Soros.

In one of the most left-leaning provinces of northern Italy, Emilia-Romagna, elections were held in late January. Italy’s right wing wanted to spread its influence and gain control of the area, which proved particularly difficult in this traditionally left-wing region.

The Sardines, of course, have put together a sturdier campaign here against the right. Following the vote, however, the movement announced that they would temporarily leave the region and stay in the background to prepare their next “stunt,” their statement says.

Schlein was born to an Italian mother and an American father in Lugano, Switzerland. After graduating from Liceo di Lugano in 2004, she enrolled at the University of Bologna. In 2008, she moved to Chicago where she worked as a volunteer in Barack Obama’s presidential campaign. In 2012 she returned to the US to train volunteers for Obama’s re-election campaign.

At the university she wrote two theses: one on the over-representation of migrants in prison and the other on the criminalisation of immigrants. She later worked on a documentary with Roland Sheikko, which recounts the migration of thousands of Albanians to Italy, using ships.

Elly Schlein entered the European Parliament as a member of the left-wing Democratic Party, where she joined the Development, Civil Liberties Justice and Home Affairs and Gender Equality Commissions. As a young MEP, she was also involved in thereform of the Dublin Regulation in 2016.

In light of her unrelenting commitment to the “open society” concept, it comes as little surprise that Elly Schlein has also made it to the so-called Soros list, which contains the names of the Open Society Foundations’ trustworthy MEPs involved in European politics.